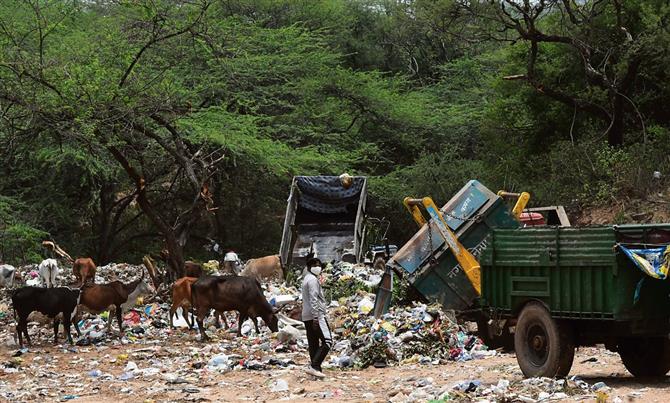 Local MLA and Haryana Speaker Gian Chand Gupta has taken a U-turn on the new dumping site at Jhuriwala.

Gupta, who had objected to the setting up of a solid waste management plat in Jhuriwala in 2018, is now justifying the move. “The uneven land with large pits at the Jhuriwala site will allow us to fill it for years even if we dump the garbage without processing it,” he said.

Residents of the trans-Ghaggar Sectors have decided to submit a memorandum to Speaker Gian Chand Gupta, Deputy Commissioner Vinay Pratap Singh and Mayor Kulbhushan Goyal on Jhuriwala dumping site on Friday. They have threatened to stage a protest on June 19 and approach the High Court if no action is taken.

He though mentioned that a garbage processing plant would soon come up at the site. “The plant can process up to 800 metric tonnes of garbage, which is much higher than the city’s daily garbage generation,” said Guta, terming the dissent against the shifting of dumping site “totally political”.

“Back then, my intent was to shift the proposed site away from the human habitation. For the same, alternative sites had been explored,” he said.

In his letter to Chief Minister Manohar Lal Khattar in June 2018, Gupta had requested the government not to shift the dumping ground to Jhuriwala. “The shifting of dumping ground near the residents’ area or near the national highway will not serve the purpose and will not be in public interest,” read the letter.

However on June 2 this year, the CM gave strict instructions to the local authorities to stop garbage disposal at the Sector 23 dumping ground, following which the Panchkula MC began dumping garbage at Jhuriwala.

MC officials said efforts were being made by the Urban Local Bodies Department to float a fresh tender for setting up the processing plant at Jhuriwala.

The government has fixed December 31 as the deadline to completely shift the dumping ground from Sector 23.

According to officials, a company had been entrusted with the task of clearing the dumping ground at Sector 23. Once the site is cleared, a park would be built there, they said.