5,034 across all categories inoculated with first or second dose in district 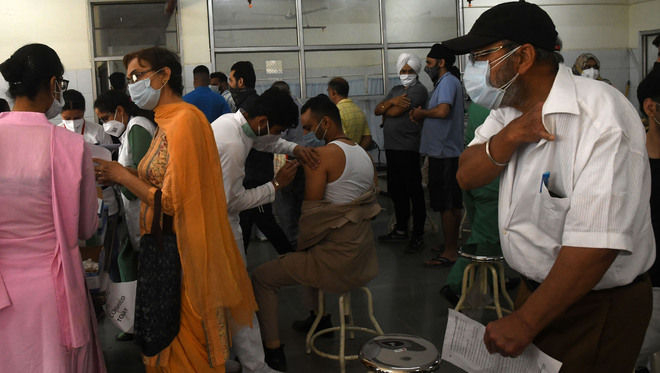 The Mohali Health Department today received 20,000 doses of Covishield to continue the vaccination drive across 50 centres in the district.

The inoculation drive at some government as well as private hospitals was affected due to a shortage of the vaccine in various parts of the district for the past two days.

The Mohali Civil Surgeon, Dr Adarshpal Kaur, said, ‘’We have received ample doses and the vaccination is being done at various centres today.’’

Don't be choosy, doctors on vax

Officials countered the perception that one make of vaccine was better than the other saying that it was better to have a vaccine than wait for one of a particular make. Doctors said some people were waiting for a particular vaccine, which was not right.

As many as 5,034 persons across all categories were inoculated with the first or second dose of Covishield today. “The actual number of vaccinations is much higher than 5,034. This is just the number which has been updated on the portal till this evening,” said Kaur.

Not a single dose of Covaxin was administered in the government facilities in the district today. “Covaxin is out of stock. We do not know when it will come. Fortis Hospital has procured it from the manufacturer on its own and they are charging Rs1,200 per dose. Those who want this particular dose can avail of it there,” she said.

On a day when Covid deaths and positive cases touched a new high, officials of the Health Department said close to 4,500 Covid tests were conducted in the district. A long queue was seen at the Civil Hospital, Phase 6, for the Covid test today.