Open House: How to stop troublemakers from vandalising smart bicycles in Chandigarh? 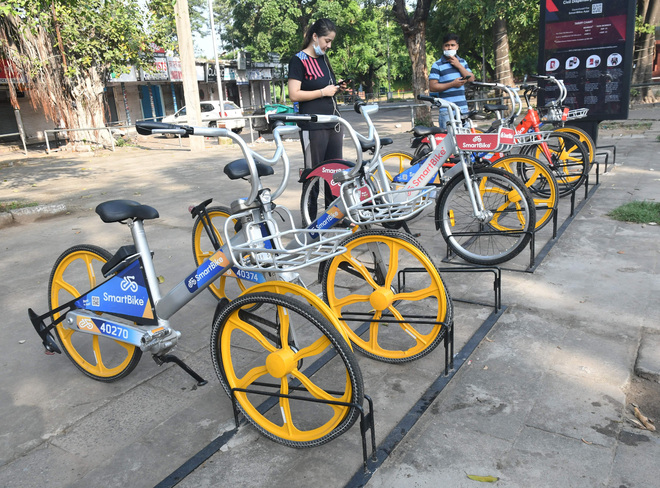 Damaged tyres of bicycles at a Sector 29 docking station in Chandigarh. file

It’s sad that in a city like Chandigarh where literacy ratio is so high, but troublemakers do not hesitate to damage government property. This development is detrimental to residents and the Municipal Corporation. The MC has started a good venture. People should appreciate and thank the MC. Bicycles should be checked when returned. In case of any damage its user should be appropriately penalised. The MC can fix fines for damages, which can be displayed at cycle stands.

Operators of public bicycle sharing project have to regularly redistribute bikes across stations to make sure these are not vacant or full to capacity. Citizens have to use bicycles with responsibility. Lastly, the Administration has to maintain and provide cycle tracks.

Public bike sharing project was launched to encourage cycling, but it failed because of faulty execution. In a city a section of people takes away dustbins, benches, iron railing, light bulbs and any other item from public places. It’s too much to expect from people, who will use bicycles and return these intact like responsible citizens to stations. The only way to make the project successful is to deploy staff to man docking stations, issue a slip to person borrowing bicycle, note down his/her full address, verify particulars and also take security, to be returned only after return of the bicycle without damage. In case of damage to bicycle, the borrower should pay fine.

Without prior wide publicity about “dos and don't” this much hyped venture of the UT Administration has faced vandalism and damage to high-tech GPS enabled bicycles. Those tech savvy youngsters, who have done it and gone scot free, must be enjoying at the folly of the authorities concerned. Hope the UT Administration has learnt a lesson and will make amends by stopping the free run period and take adequate security amount from riders before they are allowed to pedal away.

Due to extreme poverty, poor law enforcement, lack of civics sense, public vigilance and patriotic approach towards public property, among people, it will be worth to abandon the public bike-sharing project. Theft of iron railing, manhole covers, grills and now bike parts from public places is known to all. Instead, the Administration should encourage private bicycle sharing shops in the UT.

To ensure safe return of hired bicycles, the firm operating the project should make Rs500 security deposit mandatory for all users. The rate list of all bicycle parts should be displayed at every docking station in the UT. There are rogue elements in society, who always want to derail any good step taken by the Administration.

The Smart Bike app interface should be simple, easy to use and fast. It should work efficiently. Any technical glitch should be timely resolved. Software bugs should be removed. In case of a problem of locking and unlocking a bike at docking station, the customer care should be reachable within a short waiting period. More bicycles should be available across the City Beautiful. The CCTV cameras should be installed at docking station to check acts vandalism of bicycles.

With numerous complaints of vandalism at docking stations under the public-bike sharing project, the UT Municipal Corporation should install CCTVs to keep a vigil on miscreant. Cops should be deployed to take care of the menace at the docking stations. It’s laxity on part of the Municipal Corporation and sheer wastage of public money by not taking the security factor of bicycles into account.

A good initiative of the UT Administration has failed miserably. The authorities should have conducted a thorough dry run before launching the project. The bike-sharing project is public property. The culprits, who vandalise bicycles, should be tracked and booked by the police. The Municipal Corporation has to install automatic alarm systems to prevent stealing of bicycles by anti-social elements.

Why is MC eager to waste money?

Don’t understand why the Municipal Corporation (MC) is always eager to waste money on useless projects. The poor without work are barely able to make both ends meet. We have often seen people trying to damage street lights, steal iron railing and other things on which they can get hands on. They have a destructive mind. How can such people take care of bicycles? This proves that the Municipal Corporation has failed in this project too.

The bicycles launched under the sharing project are costly. We are miles away in our mentality to match up with other countries in order to succeed in such ventures. All cycle docking stands should have CCTVs and attendants. Anyone found damaging cycles should be barred from using the service. The police should be instructed to take care of vandalism of bicycles. And above all cycle tracks need to be recarpeted for a smooth ride.

Damaging bicycles is a crime. People should keep away from such acts. The UT Administration should employ security guards at docking stations to safeguard bicycles. Cops should also keep an eye on docking stations.

In another blow to the public bike-sharing project, several cycles have been damaged across the city. Around 150 complaints of vandalism were received in a month by the company managing the service. It’s shocking that instead of using such a good facility, people are damaging bicycles. CCTV cameras can be installed at docking stations across the city. It’s duty of all citizens to ensure that no one damages any government property as ultimately it we, who pay for such facilities through taxes.

Smart cycles launched by the Municipal Corporation are one of the good initiatives taken for the benefit of residents. In the present situation it’s difficult to run the public bicycle sharing project. To avoid any damage to bicycles docking stations should be located near parking. Whenever a rider comes to park the cycle after using it parking attendant can check it for any damage. Also, most parking have CCTV cameras.

We can’t dream of a society without wrongdoers, but it depends upon our system to maintain the law and order and deal sternly with such elements. The public should realise that the bike sharing project has been introduced for their convenience. This facility is pocket and environment friendly. A token showing all is okay be issued while handing over bicycle to commuter. While receiving bicycle it should be checked that everything is intact. Penalty can be levied if any bicycle part is damaged. The police should keep a vigil on thieves.

The bicycle sharing project is the need of the hour. It will decongest and reduce pollution in the city. Docking stations should be located near public offices. Besides, CCTVs can be installed near docking stations to prevent damage to bicycles by miscreant.

Teething problems at start of project

At the start of any project, teething problems do surface. Vigil and strictness should be increased and hooligans should be made to understand that they are under watch. The police can play an important role by checking footage of CCTV cameras and recognise culprits, involved in vandalism. Culprits should be counselled followed by strict action if they don’t refrain from vandalism. If successful the public bike-sharing project will reduce pollution in the city.

Fundamental duties of citizens should be displayed on large hoarding near cycle stands and roundabout of the City Beautiful. Besides, parents, teachers and society in large should take a pledge to safeguard government property, including the public bicycle sharing project. This should be imbibed in mind of youths.

Every new project encounters some glitch. But, something new happened in the public bike sharing project. miscreant vandalised bicycles and in some cases stole parts. The company managing the project should seek help from the police. The police should increase patrolling around docking stations. Besides, the company staff should keep an eye on miscreant.

Riders should be civilised

Riders should check all details before renting bicycle. The police should keep an eye on activities of bicycle riders. Security arrangements should be made to keep docking stations safe from vandals. Riders should be civilised and not damage government property.

Go all out to make project successful

The innovative bike-sharing project launched with much fanfare in Chandigarh is for facilitating residents and visitors to do a recce of the places of tourists’ interest and control pollution. The Municipal Corporation/UT Administration can’t absolve itself of inept handling, which emboldened miscreant to sabotage the project without the scantest fear of the law. The authorities need to harden their stance to check troubleshooters. Those trying to jump the fence should be given strictest punishment. The Administration should make all out efforts to pre-empt recurrence of such unsavoury incidents. NGOs and civil society may be roped in to play a proactive role in curbing such rowdy incidents and make the project successful in the City Beautiful by spreading awareness among the public.

To check vandalism the authorities concerned should install anti-theft alarms on bicycles. The police patrolling should be increased around docking stations in the city.

The public bike-sharing project launched in Chandigarh deserves all praise. Hefty amount should be recovered as penalty from the troublemaker for the damage caused to bicycle. There should be a provision that such a person, who damages bicycle, cannot avail the facility for three months for the first time and forever if found guilty for the second time. Regular checking and maintenance of bicycles must be ensured for the smooth running of the much awaited project.

The public bike-sharing project is a good initiative of the Municipal Corporation to make the city green, healthier and free from traffic chaos. Some notorious people, who are vandalising bicycles, are creating hurdles in the success of a good initiate. To stop such incidents, information of bicycle riders should be kept in record of the firm managing the project. Also, the authorities concerned should take a strict action against those notorious persons, who vandalise bicycles, and impose hefty penalty on them. Last, but not the least, citizens should know their responsibilities towards public properties.

Wait till project is fully operational

Introducing cycling for citizens is a new concept evolved by the Municipal Corporation while taking into account their health and to check pollution level in the city. The public bicycle-sharing project encountered many technical glitch after its launch. Residents will have to wait for some more time till the project is fully operational after its shortcomings are removed by the authorities concerned.

The project was thrown open to the public half heartedly. Most people, who want to hire a bicycle, are not tech savvy. Besides, there are no attendants/security guards at bicycle docking stations. People must be made aware of the technicalities of the project through advertisements in print media.

Suggestions in not more than 70 words can be sent to