Bought property worth crores after execution of GPA 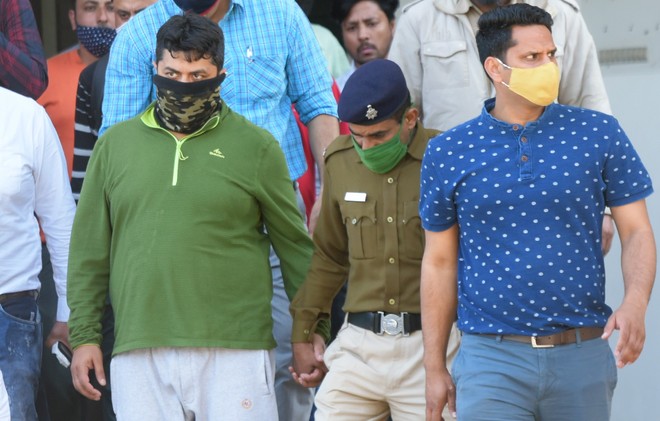 The accused being produced in a court in Chandigarh on Friday. Tribune photos: Pradeep Tewari

Three accused in the property grab case were produced before a local court today and remanded in four-day police custody. The remand application stated that Sanjeev Mahajan, a journalist, had purchased property worth crores after the execution of the General Power of Attorney (GPA) between house owner Rahul Mehta and Arvind Singla and Kalendra Singh Kadiyan, suggesting that he received a share in the deal. The police suspect more properties were grabbed by the accused, which need to be investigated.

In the remand application, the police said they needed to conduct indepth investigations into the properties worth crores and a luxury car purchased by Mahajan after the execution of the GPA between house owner Rahul Mehta and Arvind Singla and Kalendra Singh Kadiyan. The police said the properties were purchased in Mahajan and his wife’s name, which showed that he had taken his share in cash instead of a bank transaction after selling the property.

The police said a proxy of Rahul Mehta was presented before the Sub-Registrar, Estate Office, for the registration of the sale deed.

The police said Satpal was arrested last night and he needed to be “confronted” with the other two accused to ascertain the exact amount shared between them.The police said during Satpal’s interrogation, his brother’s role in the case would also be verified. According to the statement of liquor contractor Arvind Singla, recorded last month, he, along with Satpal and Ashok Arora, had met the DSP at his office to discuss the property deal. Singla had also claimed that the DSP had arranged the documents to get the property registered in the name of Manish Gupta.

The police questioned the owner of Ind Swift Pharmaceutical Company on Friday at the Sector 31 police station. Mahajan’s wife was drawing a salary from the company. The company’s owner was arrested by the UT crime branch in 2018 for tax evasion. The firm had a liability of around Rs5 crore. However, it had paid only Rs5,000 VAT. Cops suspect that Mahajan’s wife used to get a salary in return for some favour.

A fire was reported from the office of the SHO Sector 31 police station on Thursday night due to a short circuit. The files pertaining to the case were also kept there. The incident came to notice on time, which saved the files from getting burnt.