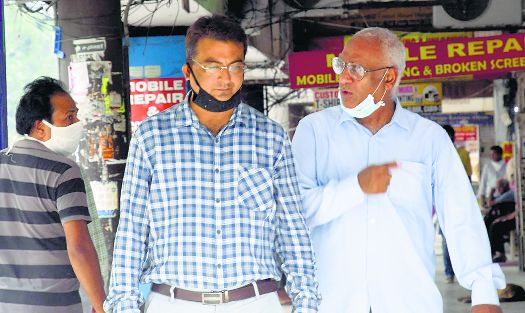 People not wearing their masks properly at the mobile market in Sector 22, Chandigarh, on Saturday. Tribune Photo: Pradeep Tewari

Badnore had warned of more restrictions and even curfew if it was found that residents were not following the guidelines issued by the UT Administration to contain the virus.

During a visit to various areas in the city, it was found that some of the people were not following the laid down guidelines at a time when the UT is witnessing a surge in Covid cases. The city has the highest number of coronavirus cases in the tricity.

At the crowded Sabzi Mandi in Sector 17, it was noticed that people had pulled down their face mask and were roaming around freely. Due to the rush, there was hardly any social distancing.

“There are a large number of vendors and visitors here. So, social distancing is not possible here. It can be implemented here if specific spaces are marked and there is a strict vigil,” said Mahesh Kumar, a customer. No one was present there to keep a check or manage the crowd.

Some people were also spotted at the Sector 22 mobile market without wearing a face mask. “I think local residents are following the norms. Most of the people coming from outside do not wear a face mask as the authorities are not strict there like in Chandigarh,” said a shopkeeper.

Social distancing was hardly witnessed at the underground mobile market in Sector 22. The market has narrow stairs and a number of people huddle together without waiting for others.

“Even if five per cent people are not wearing a face mask in a public place, they can infect many. Police or volunteers/marshals should be deployed on a permanent basis, at least in the main markets. MC’s enforcement staff, who are present in the market, can also be given powers to challan violators,” said Mandip Kumar, a visitor to Sector 22.

Narender Singh Rinku, president of the Sadar Market, Sector 19, said: “We ensure that all customers and shopkeepers wear a face mask. The police are also active here. They issue a challan if anyone is found violating the norms.”

DSP Charanjit Singh Virk, PRO, UT Police, said teams formed by the UT Administration were keeping a check and the police were challaning people for not wearing a mask.

“We will intensify our drive to penalise the violators. The government alone cannot enforce everything. People must voluntarily obey the

rules for their own safety,” said UT Adviser Manoj Parida.