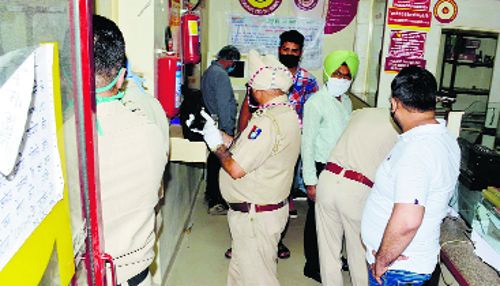 Forensic experts at the PNB branch in Kishangarh where a theft attempt was made.

Two unidentified miscreants broke into Punjab National Bank (PNB) branch at Kishangarh and made an unsuccessful attempt to break a deposit machine on the intervening night of May 30 and 31. The thieves returned empty-handed after searching the bank premises.

The theft came to light in the morning after which the police were informed, who visited the spot.

The police said two persons, who had their faces covered, entered the bank after breaking the front shutter.

The duo then made an attempt to break open the deposit machine. They made several failed attempts, said a cop.

The thieves then searched for cash in the drawers at employees' desks. However, they could not find anything there.

"They stayed inside the bank for around 10 minutes and left without stealing anything," said a police official.

The incident took place around 3 am.

The police have collected the footage of CCTV cameras installed in the bank and nearby areas.

A forensic team of the UT police also visited the spot and lifted fingerprints.

A case in this regard has been registered at the IT Park police station.