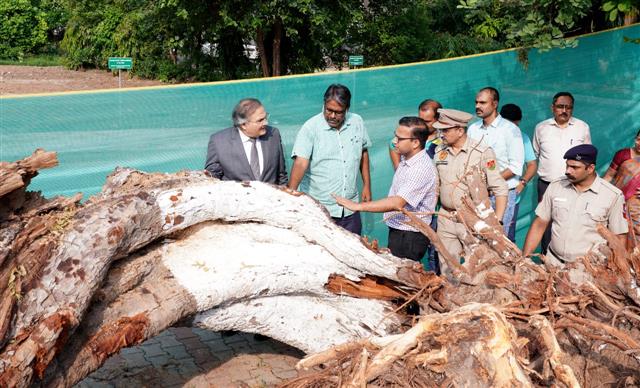 Justice Jitendra Chauhan (retd) and members of a team from the Dehradun forest institute during a visit to Carmel Convent. file

Even two months after a 16-year-old girl lost her life and 19 others suffered injuries as part of a heritage peepal tree fell on the Carmel Convent School premises on July 8, the UT Administration is yet to fix responsibility.

On July 12, the administration had constituted a one-member inquiry committee headed by Justice Jitendra Chauhan (retd), a former judge of the Punjab and Haryana High Court, to ascertain the facts and fix responsibility in the incident. The committee was also entrusted with suggesting remedial action to be taken to prevent any such untoward incidents in future.

Report not submitted, responsibility to be fixed after studying report

Report to be submitted to one-member inquiry committee

An official said the report of the inquiry committee was yet to be submitted and the responsibility could be fixed only after studying the report. After the incident, the administration had constituted a committee of officials from the Municipal Corporation, Forest Department and Horticulture Wing of the administration to visit all 211 schools and other educational institutions in the city to inspect trees to avoid any such incident in the future. The District Magistrate had also ordered a magisterial inquiry to look into the incident.

The inquiry panel was headed by the SDM (Central) with the Executive Engineer, Horticulture, UT, and Range Forest Officer, Forest Department, as its members. The official said the magisterial inquiry report was to be submitted to the one-member inquiry committee.

Later, new guidelines for felling of trees in Chandigarh were issued.