Despite vowing to do things differently, Imran has been unable to break away from army 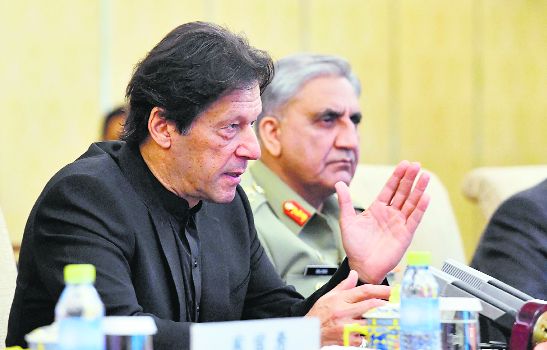 Giving in: Imran Khan is ready to play second fiddle to the military and give it an ever-increasing role in governance.

Pakistan closed India’s Consulate General in Karachi in 1994, ostensibly because of public anger in the country following the destruction of the Babri Masjid in Ayodhya. The real reason, however, lay in the Partition. Thousands of Muslim families in India moved across the border to Pakistan to settle down in cities like Karachi, Sukkur and Hyderabad, with expectations of a better life in a Muslim-majority country. They soon found that they continued to be pejoratively described as ‘mohajirs’ (refugees), even four decades after independence!

Being the Consul General of India during the revival of interest of ‘mohajirs’ in Karachi and elsewhere, in their relatives and in the land of their forefathers, was a fascinating experience for me. This was more so when we got to meet ordinary people freely, when sports teams from India, particularly cricket teams, visited Pakistan in 1982 and 1984. I got the opportunity to meet and entertain cricketers from both sides. Sunil Gavaskar and Imran Khan were rival captains.

Imran Khan rattled our batting with the devastating ‘reverse swing’ in his bowling. The ‘reverse swing’ became more prodigious after lunch and tea breaks, when the ball was in the pockets of Pakistani umpires! But there was no denying that Imran Khan was a highly talented bowler who led his country to a World Cup victory. What is, however, etched in my memory is a comment made by him, which was narrated to me by a Pakistani sports commentator. When the commentator remarked to Imran that his bowling seemed to achieve extraordinary pace whenever he played against India, Imran replied: ‘When I play against India, it is not merely cricket. I think of Kashmir and regard it as a jihad!’

Among his political mentors from the armed forces, one of the founding members of his Tehreek-e-Insaf Party was former ISI chief, Lt Gen Hamid Gul, a known Islamist. Gul had weird views on Kashmir and India’s Muslims. But, even with the passage of time, Imran Khan was very unlike other political leaders who could side-step pressure from the military. He is clearly ready to play second fiddle to the military and give it an ever-increasing role in governance. The army in Pakistan plays a domineering role in the conduct of foreign and security policies, particularly on ties with India, the US, China, Russia, and important Islamic countries like Saudi Arabia and Iran. It has, very recently, even entered the arena of economic management.

General Bajwa and his ISI chief, Lt Gen Faiz Hameed, accompanied Imran Khan, when he met President Trump in Washington. This was the first time that the army bosses were present at a White House meeting. Even before the meeting, Bajwa put his personal stamp on relations with China and Iran. But it is really on Kartarpur that Bajwa publicly revealed his role in relations with India, ostentatiously fraternising with a Punjab Government minister, during the inauguration of the corridor. The ISI remains set on creating a Hindu-Sikh divide, using the services of Sikh expatriate communities in the UK and Canada. Bajwa has also used an ever-obliging Imran Khan by getting himself appointed to the newly established National Development Council.

Even more stunning has been the Imran Khan government’s backing of the army’s tirade against Waqar Seth, the Chief Justice of the Khyber Pakhtunkhwa High Court. Chief Justice Seth headed the Special Court that handed down a death sentence for treason to General Pervez Musharraf, for his role in declaring an emergency in 2007 and dismissing the elected government, the Chief Justice and several Supreme Court judges, while also suspending the constitution. Benazir Bhutto was mysteriously assassinated during this period. Justice Seth is a no-nonsense judge who has shown the guts to challenge the extra-constitutional role of the army. He has a track record of challenging extra-constitutional powers the army has wielded, which has no place in any civilised democracy.

In another significant judgment, Justice Seth had quashed the death penalties against 74 civilians passed by a military court, which were endorsed by Bajwa. Rejecting the death penalties, Justice Seth noted that the verdicts on the 74 accused did not fulfil the basic principles of justice, and were obviously unwarranted and fake, as all 74 confessions were identically worded! The reaction of the army to the High Court verdict on Musharraf was announced by a ‘two-star’ Bajwa crony, Maj Gen Ghafoor, who proclaimed: ‘Today’s verdict, especially the words used in it, is against humanity, religion, culture and our values.’ Ghafoor spoke of a ‘sinister design’ by ‘anti-state elements’, which were both ‘internal and external’, and would be foiled. For good measure, he added that the judgment was causing ‘pain and anguish’ in the army.

Ghafoor’s comments on a high-level judicial order would have led to his being behind bars in any democracy. But, rather than condemning him, ministers of the Imran Khan government hurled public abuses on Justice Seth. It is quite obvious that the government will raise the decibel of condemnation against the judgment, and apply every conceivable pressure to have it rescinded. Much would depend on whether Pakistan’s present Chief Justice will show the same courage as former Chief Justice Iftikhar Muhammad Chaudhry did in challenging the national emergency declared by Musharraf. The Supreme Court will also have to soon address the issue of the extension in service tenure, which Imran Khan has so generously granted to Bajwa. This extension, by all accounts, does not enjoy unanimous support within the higher ranks of an otherwise disciplined army, which traditionally respects its chain of command.