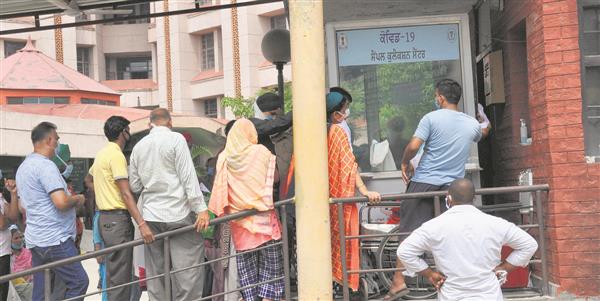 People queue up to get tested for Covid at the Civil Hospital.

The district health authorities reported seven casualties due to the Covid-19 pandemic, taking the toll to 271 on Tuesday. Besides, with 305 new cases, the tally has risen to 5,405 in the district.

Of the new cases, 170 were having symptoms of influenza-like illness (ILI) and 135 were contacts of positive cases. Now, the total count of positive cases stands at 6,978. Of them, 5,067 patients have recovered and 1,640 are active cases.

DC Gurpreet Singh said it came to light that a large number of people preferred to stay inside their houses despite having Covid-19 symptoms. They did not approach government hospitals offering treatment by qualified doctors. “These people like to procure medicines from chemist shops in their areas,” he said.

Keeping in view a constant spike in the number of positive cases of Covid-19, the Deputy Commissioner called upon the people to comply with the norms and get themselves tested if they have any of the symptoms. Meanwhile, the Police Commissionerate, Amritsar, imposed Section 144, CrPC, around the isolation wards of asymptomatic patients, banning the assembly of five or more people.