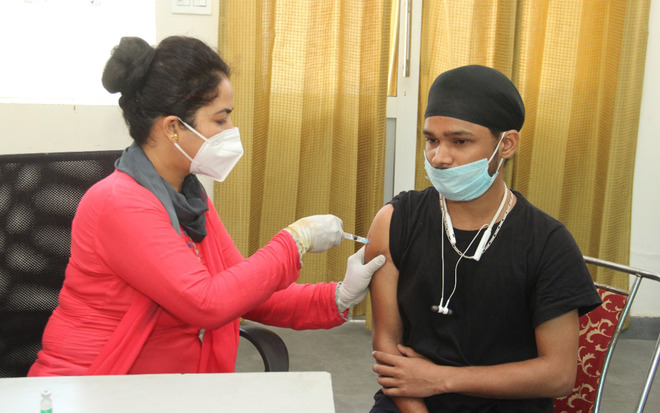 A resident gets a Covid jab at a vaccination camp in Jalandhar.

The health authorities reported 98 new Covid-19 cases in the district on Monday, taking the case tally to 62,088.

The authorities reported three deaths in the district today and the toll reached 1,444. As many as 59,640 patients recovered while the number of active cases stands at 1,004 in the district.

The district reported two more Covid fatalities on Monday, taking the toll to 948, while 38 fresh cases pushed the infection count to 29,952.

On Monday, 2,840 new samples of people with suspected flu-like symptoms were collected. With this, the total number of samples taken in the district till date has reached 6,16,572, of which 5,86,549 were negative, while the report of 3,231 samples was awaited and 623 were invalid.

The number of active cases in the district is 471, while the number of patients who have recovered is 28,433. The district reported two deaths, of which a 36-year-old woman of Cheema village died at Dasuya Civil Hospital and a 57-year-old man of Budhawar block died at a private hospital in Jalandhar.

The health authorities reported 11 fresh Covid cases in Nawanshahr district on Monday. With this, the infection tally has increased to 11,299. No death was reported in the district today.

At present, the district has 157 active cases and 131 patients are under home isolation. The number of persons who have recovered is 10,803. Urban Rahon, Banga, Mukandpur and Sujjon blocks did not report any fresh case today. At present, 18 persons are under treatment at L-II Covid care unit and seven at L-III Covid care unit.