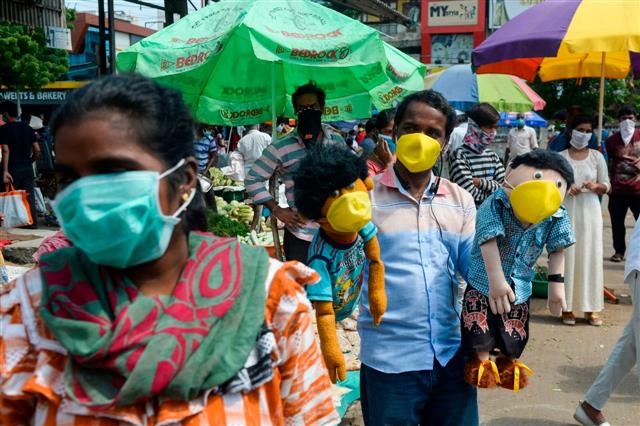 Careless attitude of people in wearing masks and following social distancing norms is leading to a surge in coronavirus cases in the national capital, experts said on Sunday.

Dr Upali Nanda of Medeor Hospital in the Qutab Institutional Area here said, “Reopening of all places, including restaurants and weekly markets, has led to an increase in traffic and intermingling of population.”

She said even if people are putting on masks, they are wearing it improperly. “It keeps hanging below their nose or below their chin. They keep touching the front of their masks. The purpose of wearing masks has been defeated,” she said.

People are not carrying a bottle of sanitiser and one is not even seen wearing gloves. Poor mask discipline, not following social distancing norms and people letting their guard down owing to fatigue that has grown during the pandemic are leading to a surge in the positive cases.

Dr BL Sherwal, the Medical Director of Rajiv Gandhi Super Speciality Hospital, said, “Testing has been increased and the cases have gone up, but they should come down. In my view, we are going to have a slowdown maybe in a week or so.”

However, he said people letting their guard down are a worrying part and people need to be told that “we are still in the coronavirus phase”.

Delhi Health Minister Satyendar Jain has repeatedly said COVID-19 cases have seen a surge in Delhi as there has been an increase in the number of tests being conducted on a daily basis. He has said that the situation will soon be under control.

“The COVID-19 situation will be soon under control. We are testing more than 60,000 people every day. There is no need to panic, but people should be cautious and use face mask and follow other measures to prevent spread of the virus,” Jain had said while addressing a one-day session of the Delhi Assembly.

According to a spokesperson of Dr. Lal PathLabs Ltd, as more and more activities are allowed and people start moving out, “we may have to be ready for some increase in COVID-19 cases”.

The number of rapid antigen tests conducted on a daily basis is almost five times the number of RT-PCR tests. Delhi has a capacity of conducting 14,000 RT-PCR tests, but the tests are not being conducted to full capacity, the spokesperson said.

Nanda said rapid antigen tests can have a lot of false positive and a lot of asymptomatic patients are coming positive on a daily basis and that could also be the reason for the high number of cases on a daily basis.

Dr Alpana Razdaan, Lab Head, Genestrings Lab, said, “RT-PCR tests are not happening in full capacity. Despite there being a limit of 14,000 tests daily, the number of RT-PCR tests being conducted is less. The government has to push for more tests. We have not received any guidelines from the government on increasing RT-PCR tests. The testing has to be more efficient.”

The spokesperson of Dr. Lal PathLabs, however, said they haven’t observed any drop or irregularity in the number of RT-PCR test requests.

Hospital admissions have also seen a surge due to the increase in the cases.

Dr Sherwal of Rajiv Gandhi Super Speciality Hospital said they were down to 44 patients a day at one time but now the number of patients has gone up to 200 on a daily basis. He also said that a good number of patients from outside Delhi are availing treatment facilities here.

Dr Suresh Kumar, the Medical Director of LNJP Hospital, said their hospital was having 40-50 patients at one time but now admissions have doubled and they are seeing 100 patients every day.

“Our hospital has 740 patients currently. People are coming from outside. Interstate mobility has increased and people from outside Delhi are coming here for better treatment facilities due to plasma therapy being available here,” he added.

Kumar said that the infection rate may slow down in 15-20 days.

The Delhi government has significantly ramped up testing in the past few days.