Invoices and MRP stickers displaying a price of Rs 69,999 per concentrator also recovered 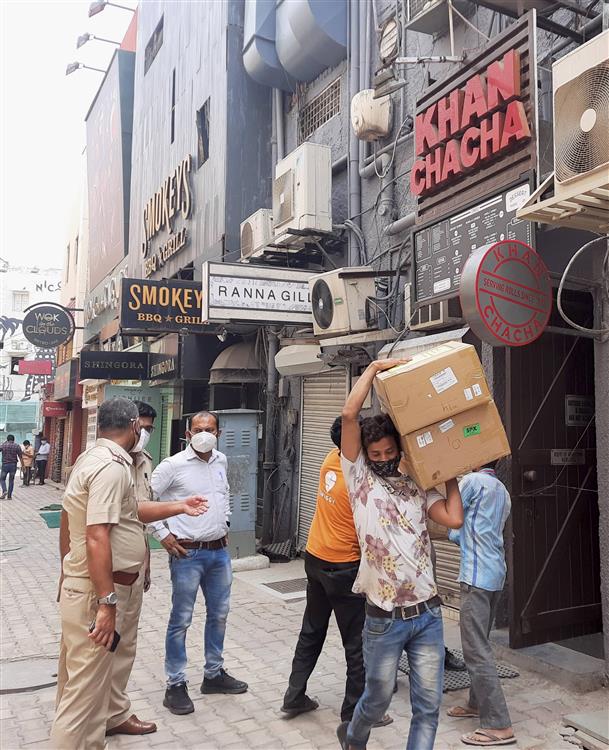 Police personnel during a raid at Khan Chacha restaurant, in which boxes of oxygen concentrators were recovered, in New Delhi. PTI

The Delhi Police conducted raids at two restaurants in the national capital and recovered over 100 oxygen concentrators, used for treatment of COVID patients, officials said on Friday.

According to the police, 96 oxygen concentrators were recovered from Khan Chacha Restaurant and nine were seized from Town Hall restaurant, both situated in the Khan Market area.

After the arrest of the four men, the police had recovered 419 oxygen concentrators that were meant to be sold in black market.

Police said during interrogation, Hitesh disclosed that they were hoarding oxygen concentrators in these restaurants following which raids were conducted at the joints at the Khan Market area and the equipments were recovered.

The owner of these two restaurants is a man named Navneet Kalra, police said, adding that his involvement is being investigated.

Kalra also owns another restaurant where police had conducted raids and recovered oxygen concentrators on Wednesday.

Earlier, the police had said that Nege Ju Restaurant and Bar in central market Lodhi Colony was found open on Wednesday.

A man was found working on a laptop at the restaurant who was later found taking online orders for oxygen concentrators, police had said earlier.

Police had searched the restaurant premises and recovered 32 boxes of oxygen concentrators, one box of thermal scanner and one box containing N 95 masks, the officer had said.

“A case was registered and four accused persons were arrested,” Deputy Commissioner of Police (south) Atul Kumar Thakur had said.

During interrogation, the accused disclosed about their warehouse in Chhatarpur, following which a search was conducted and 387 more units of oxygen concentrators were recovered which were being sold at exorbitant prices in black market, the DCP had said.