A family’s repeated attempts to get admission fail. Finally, contacts at a private hospital help 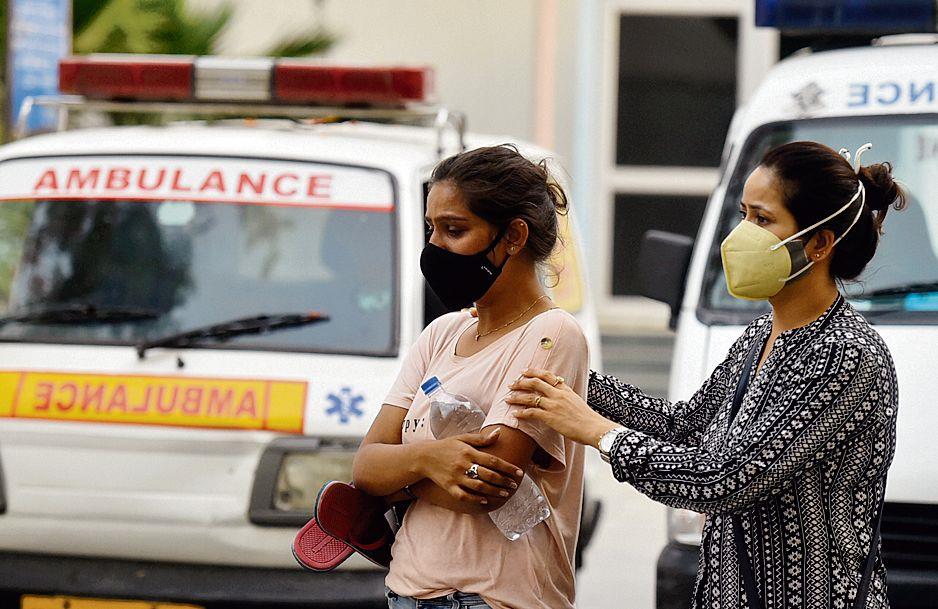 Family members wait outside a hospital in New Delhi. PTI

The ordeal that Madhu Sharda, a resident of Pitampura, and her family suffered in the past couple of days is a story of gaping inadequacies in the Capital’s health infrastructure. After the 71-year-old Covid-positive patient’s health deteriorated on Friday, her family (husband and daughter) rushed her to a leading hospital near their residence in West Delhi. Despite their pleas, they were advised to take Madhu home. There is no vacant bed and she will be managed better at home, they were told.

Left with no choice, Madhu was brought home. However, as the night progressed, her condition worsened with oxygen levels dipping to dangerous levels, leaving her gasping for every breath that she took. The next day again the family took her to nearby facilities, hoping that now she will be admitted. While for most hospitals the sole criterion for admitting patients is oxygen saturation levels, they were again turned away for “lack of beds”.

Their efforts to find “a bed with ventilator” also failed in hospitals that were otherwise showing vacancy on the Delhi Government websites. After hundreds of frantic phone calls to friends and beyond, Madhu was finally accommodated through “jaan-pehchaan” in a private hospital. Currently, she is on a ventilator, struggling for life with a “50-50” chance.

Her husband says, “Madhu lost precious hours in getting what is her right as a citizen of the country. It is a complete failure of the government.” Madhu is lucky that she was able to get admitted, even if through “jaan-pehchaan”. Getting admission in hospitals in Delhi is becoming increasingly tough for Covid patients with the city witnessing manifold increase in the number of infections and deaths due to coronavirus.

Amid reports of Remdesivir being sold on the black market, patients and their families are questioning what the governments, both the Centre and state, have been doing in past months. “The BJP and AAP claim to be parties with a difference but they have both proved to be just like other political parties. The governments cannot escape their responsibility or hide under disclaimers of this being an unprecedented situation. They should have known that another wave was coming, they had enough time to prepare and ramp up the infrastructure,” says Madhu’s husband.

On Sunday, after the Capital reported its highest-ever daily spike, Chief Minister Arvind Kejriwal urged the Centre to provide more hospital beds to tackle the crisis. “Less than 100 ICU beds are available” in Delhi and situation is “worsening every moment”. Due to a rapid increase in Covid-19 infections, hospital beds and oxygen for patients are also depleting, he said.

With positivity rate in Delhi going up from 24 per cent to 30 per cent in just 24 hours, it means nearly one in three persons getting tested for coronavirus is positive for the infection. Kejriwal said he had spoken to Home Minister Amit Shah regarding the need for beds and oxygen. He said he had also requested Health Minister Harsh Vardhan for more beds and increasing the supplies of medical oxygen, Remdesivir and tocilizumab. Currently, only 1,800 of the 10,000 Central government hospital beds are reserved for Covid-19 patients, he said.