The bright image of Lord Ram, the grand temple and the Indian Tricolour beamed on a giant wrap-around LED display screen on Wednesday 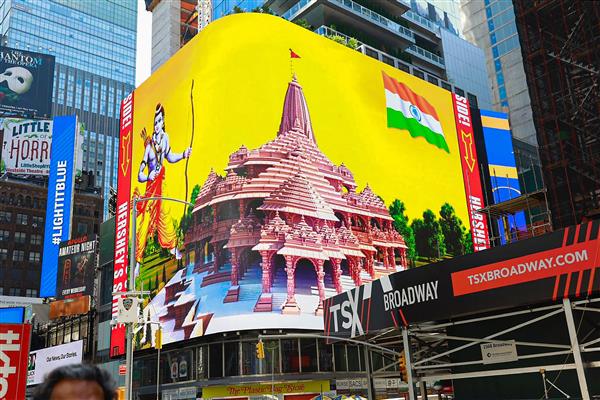 The bright image of Lord Ram, the grand temple and the Indian Tricolour beamed on a giant wrap-around LED display screen on Wednesday. PTI

The image of Lord Ram and the grand Ram Temple to be built in Ayodhya beamed across a giant billboard at the iconic Times Square in New York City where members of the Indian community gathered in large numbers to celebrate the ‘bhoomi pujan' performed by Prime Minister Narendra Modi.

The bright image of Lord Ram, the grand temple and the Indian Tricolour beamed on a giant wrap-around LED display screen on Wednesday.

While the organisers had planned to beam the photos from 8 am to 10 pm on Wednesday, the image of Lord Ram and the temple was displayed for about four hours till 1 pm.

“Extremist groups can try to stymie us but they cannot silence Hindus. Come celebrate our RamJi in Times Square tonight at 7.30 for a diya lighting!! (there will be no displays in the evening),” the organisers said on the website ramcelebration.org.

Prominent community leader and president of the American India Public Affairs Committee Jagdish Sewhani and organiser of the event said the members of the Indian community gathered in huge numbers to celebrate the historic day when Prime Minister Modi performed the ‘bhoomi pujan' of the Ram temple in Ayodhya.

Dressed in cultural attires, members of the Indian diaspora from across the New York tri-state area and many travelling from other states gathered in the evening at Times Square where the organisers had planned to light diyas, sing bhajans and distribute sweets.

Chanting ‘Jai Shri Ram' and waving flags and banners, the people celebrated the groundbreaking ceremony of the temple in Times Square.

Sources said the company running the billboard cited legal obligations to say they could not run political advertisements.

Sources, however, added that the image was not political in nature.

They said the image of Lord Ram being displayed at Times Square, even if for four hours and not for the entire day as initially planned, is unprecedented and historic in itself.

Sewhani had earlier said: “This is not a once in a lifetime or a once in a century event. This is an event that comes once in the life of mankind. We had to give it a befitting celebration and what better place than the iconic Times Square to commemorate the 'Ram Janma Bhoomi Shilanyas'.

“Under Prime Minister Modi, the construction of the Ram Temple is a dream come true for Hindus all over the world. Till six years back, we never thought that this day would come soon but due to Modi's leadership, this day has come and we want to celebrate it in a befitting way.”

However, some groups had voiced opposition to the celebration in Times Square and the display of the image of Lord Ram and the temple on the billboards.

Coalition Against Fascism in India, Hindus for Human Rights and Indian-American Muslim Council had signed a petition to New York City Mayor Bill de Blasio against the display of the image on billboards.

The Coalition Against Fascism in India had organised a protest at Times Square at the same time that members of the Indian community gathered to celebrate the occasion.