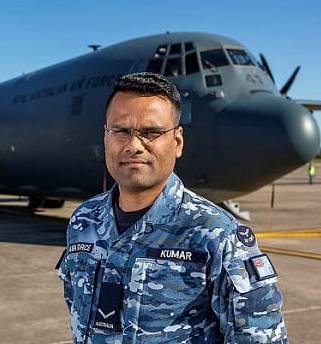 A decade after Tajinder Kumar landed in Australia and took up a job as a washroom cleaner, he is set to become a commissioned officer with the Royal Australian Air Force (RAAF).

After spending the early days in a foreign land cleaning toilets in a shopping mall and facing language as well as cultural barriers, he joined the RAAF as a recruit and certified in aviation maintenance.

Indian Australian Tajinder Kumar will soon be inducted into the @AusAirForce as an officer, a long cherished dream he fulfilled thanks to his grit and determination, Australia’s High Commissioner to India Barry O’Farrell tweeted

Then in 2016, Tajinder won the Lipshur Family Bursary which provides sponsorship to enlisted personnel for a full-time undergraduate degree. This enabled him to pursue a degree in engineering, which otherwise may not have been possible.

He will be graduating from the Officer Training School in Melbourne later this year. Several persons of Indian origin already serve in the Australian military at various levels. India and Australia also have historical military ties and associations, having been part of the British Empire and troops of both countries serving alongside in various campaigns.

Tajinder belongs to Ludhiana and comes from a humble background. After finishing high school, he trained as a mechanical fitter at the Industrial Training Institute, but was unable to find a job locally.

Thereafter, he decided to move overseas and came to Australia as a skilled migrant. During his stint with the air force, he worked as an avionics technician on C-130 transport aircraft.