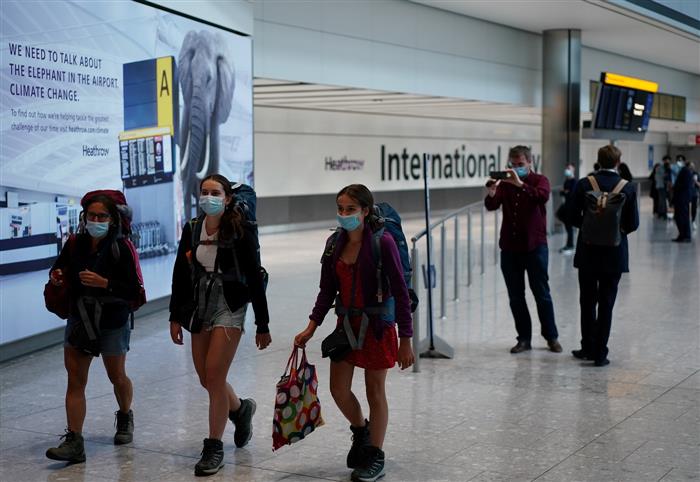 A briefing document drawn up by officials at Public Health England shows that between March 25 and April 7, a total of 3,345 arrivals from India were registered in UK border travel data. Reuters file

Heathrow Airport in London, the UK’s largest and busiest airport, has declined requests from at least four international aircraft carriers to land eight extra flights from India on Thursday, ahead of the coronavirus pandemic “red list” travel ban which comes into force from Friday.

The airport said the decision to decline requests for additional flights was taken to ensure that the existing pressures on the border are not “exacerbated”, resulting in long queues and crowds at passport control on arrival.

India’s addition to the travel “red list” was announced in the House of Commons earlier this week amid 103 cases recorded in the UK of a new variant of coronavirus first detected in India. Health Secretary Matt Hancock told MPs that the decision had been made after studying the data and on a “precautionary basis”.

It has since triggered considerable confusion and panic as hundreds of Indian students and other UK-based British Indians scramble for return flights ahead of the Friday deadline. London-based family-owned travel agency, Tickets to India, is among the agents who have been working round the clock to try and sort out charter flights to carry Indian-origin passengers back to the UK.

“Hundreds of British nationals are still requesting seats but there is very little time to arrange a second charter before Friday,” said the company, which was working on getting clearance for one Qatar Airways A350 to bring 300 passengers back before the cut-off time (4am local time) on Friday.

The UK Civil Aviation Authority said it had received several applications for charter flight permits from India to the UK, but many have been declined or withdrawn as they did not meet the qualifying criteria.

“We are in a global health pandemic – people should not be travelling unless absolutely necessary,” a UK government spokesperson said.

“Every essential check helps avoid the risk of importing dangerous variants of coronavirus which could put our vaccine rollout at risk,” the spokesperson said.

Prime Minister Boris Johnson, who was forced to cancel his India visit due to the surging coronavirus cases in India, told a Downing Street briefing earlier this week that the so-called “Indian variant” is still a variant under investigation, not a “variant of concern” as Public Health England (PHE) and other authorities continue to investigate its transmissibility and any vaccine resistance.

A briefing document drawn up by PHE officials shows that between March 25 and April 7, a total of 3,345 arrivals from India were registered in UK border travel data, being collected through compulsory passenger locator forms at the airport. Of the arrivals so far 161 – or 4.8 per cent – tested positive for COVID-19 after a PCR test.

The travel ban means that those with valid residency rights returning to the UK after the deadline on Friday face the additional financial burden of compulsory hotel quarantine and tests costs, estimated at around 2,000 pounds per person.

“Significant concern is being raised about the cost of quarantine as well as how the new restrictions impact student eligibility for the Graduate visa route for which they need to be in the country by particular dates,” said NISAU UK chair Sanam Arora.

The Home Office had already extended the deadline period for the physical campus presence requirements for students to be able to apply for the new Graduate or post-study work visa until June-end and a further extension is reportedly being considered.

Meanwhile, the government has indicated that students with valid visas but yet to collect their biometric residence permits (BRPs) would qualify for entry, subject to all the additional quarantine rules. PTI