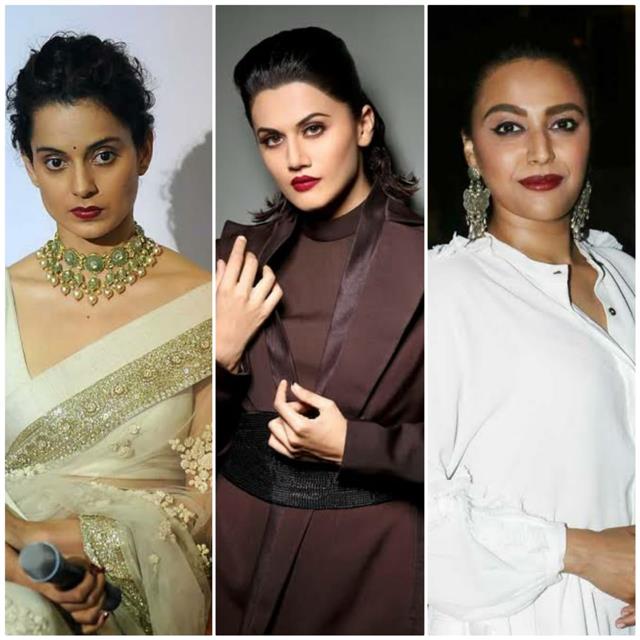 The digital team of Kangana Ranaut on Monday was engaged in a battle of cryptic tweets with Taapsee Pannu and Swara Bhasker.

The social media war seems to be an outcome of certain comments Kangana made in reference to Taapsee and Swara in a television interview.

Taapsee tweeted to allege that "someone" is trying to use divide-and-rule policy in the film industry, without taking names.

"Before that there is someone trying to use divide n rule policy in the film industry. Yes there are differences between ppl born with pedigree n the 'outsiders' but we aren't battling each other we are battling for a BETTER SYSTEM TO CO EXIST not by mud slinging n name calling!" Taapsee tweeted from her verified account on Monday.

Taapsee's tweet comes in the wake of Kangana's interview given to a TV channel over the weekend, where she called Taapsee and Swara "B-grade actresses" and "needy outsiders".

The tweet by Taapsee came as a response to a netizen's tweet that reads: "History would remember @taapsee and @ReallySwara as people who stood up against hate without being hateful. Two actors who could've easily stayed silent like most of their colleagues while their country was being divided by a dictator, but chose not to."

On Monday, scriptwriter Kanika Dhillon tweeted from her verified account: "Attagirl! @taapsee ... N not to forget... as per recent articles in public domain-n I quote 'her last 5 releases made 352 cr' at box-office- stating her as d Most successful n highest grossing actress of hindi film industry last year!" Well take a bow! so proud o u!"

"I guess that's what qualified me for B grade," came Taapsee's tongue-in-cheek response.

Kangana's digital team, which goes by the name Team Kangana Ranaut on an unverified Twitter account, took a dig at both Taapsee and Kanika.

"MissionM or Badla they are male dominated films, @taapsee never gave a solo hit in her whole life @KanikaDhillon n whole left ecosystem trying to cover up murder of SSR who complained about nepotism n Bullying shame on you all no one defended him but defending his murders now," tweeted Team Kangana Ranaut.

Swara Bhasker, who was also referred to as "B grade" and "needy outsider" by Kangana in the interview, tweeted her comment, too.

"Okay so while on topic.. full disclosure and confession. I am needy. I need respectful public interaction. I need rationality and logic in debate. I need sane, civil and decent public discourse. I need rule of law. and I need FACTS! What do you need? #NeedyOutsider," Swara tweeted from her verified account on Monday.

Just a few minutes after Swara's tweet, Team Kangana Ranaut responded with this cryptic tweet from their unverified account: "Kangana pridicted this in her interview, vultures will be out for her blood, needy, greedy, liberals with price tags on them and struggling B grade failed actors whose ambitions r beyond their worth n talent are all out attacking a single woman who raised her voice against Mafia." Meanwhile, Sonakshi Sinha has reacted to an interview Taapsee Pannu gave to a leading daily.

Taapsee did not name Kangana in her tweet but talked about getting graded.

Sharing a screenshot of the interview, Sonakshi wrote on her verified Instagram account story: "Proud of you @taapsee. The dignity, maturity and integrity with which you have responded has my respect and I am sure of most others too. More power to you." — IANS