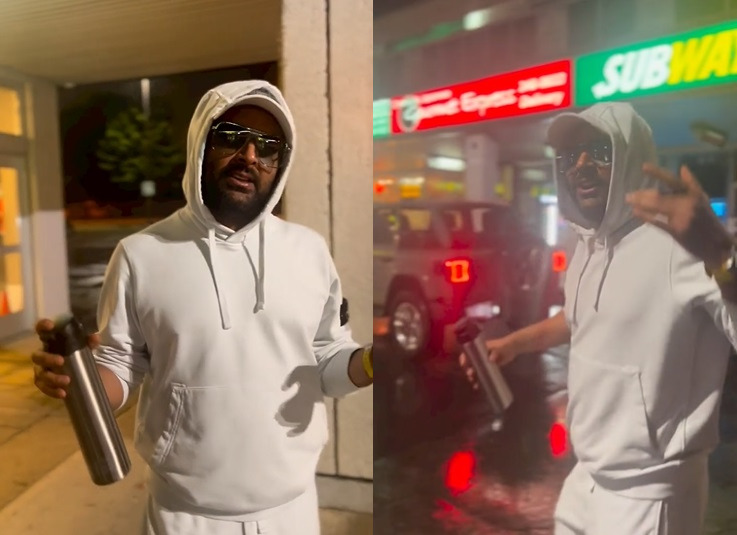 Kapil Sharma speaks 'too much English' in Canada. Instagram/kapilsharma

Comedian Kapil Sharma is having a ball on his international tour. These days, he is in Canada with his team including show Krushna Abhishek, Kiku Sharda, Chandan Prabhakar, Rajiv Thakur and Sumona Chakravarti. The comic has made sure to stay connected with his fans and followers by giving regular updates as he enjoys fandom on foreign shores.

In the latest, Kapil Sharma is celebrating Canada Day with his friends and it’s not just thing gang that’s having a good laugh but even netizens can’t control.

Kapil shared a funny video where he is speaking ‘too much English’ but you’ll hear as much Punjabi. He begins speaking in Punjabi and tells his fans that he decided to step out in open jeep but it’s raining. He goes, “Today is Canada Day so we thought let’s go out in open jeep.”

Then he walks towards the jeep to show what happened to it. He says, “I will show you what happened.. It’s raining and our jeep is smashed.” Another person, who sounds like Kapil’s friend Chandan Prabhakar, is recording the video and adds, “Itni baarish ho rahi hai aur ye banda open jeep khuli chodh kar…(It’s raining so much, and this man left the open jeep open).” On hearing this, Kapil laughs and says, “Open jeep open hi hoti hai bro..tainu angrezi nahi aati bro(Open jeep is open only, you don’t know English bro).”

The caption of this fun video has left everyone laughing. Kapil wrote, “Too much English in #toronto #canada 🇨🇦 #kslive #kslive2022 #happycanadaday🇨🇦 ps:- watch till the end 😂.”

There are other posts from his time in the USA and also when he landed in Canada. Each of these updates has that typical Kapil Sharma touch of wit and humour to it.

The Kapil Sharma show is temporarily off air due to his ongoing tour. He recently featured in his OTT debut with Netfix special, Kapil Sharma: I'm Not Done Yet. He also has two films Firangi and Kis Kisko Pyaar Karoon in the pipeline.