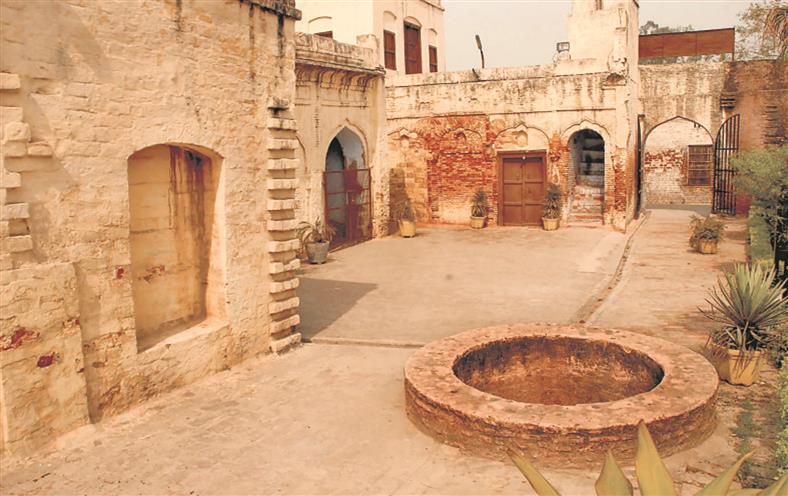 The courtyard and the layout of the ancestral house of Shaheed Bhagat Singh at Khatkar Kalan village in Nawanshahr; a picture taken in the ’60s of the house.

For over a century now, the ancestral home of Indian Socialist Revolutionary — Shaheed Bhagat Singh — is the pride of Khatkar Kalan in Nawanshahr.

But a few people know that the house was built in 1858 by Bhagat Singh’s great-grandfather Fateh Singh, who named it ‘Deewan Khana’, as he would hold a durbar at the house to impart justice to the people of his village. Besides, he used to encourage people and tell them that governments may come and go, but their problems would find solutions if they earmark them jointly.

As the country will be celebrating Bhagat Singh’s 113th birth anniversary on September 28, let’s all pledge to bring the change he dreamt of, and, instead of holding rallies, political events, we should follow his ideology in true spirit. Taking the message from this house, people should strengthen gram sabhas to plan the village. Bhagat Singh raised the slogans of Inquilab Zindabad and Samrajyavad Murdabad, but the country’s leaders and some parties were limiting his message, thereby restricting his ideology. – Prof Jagmohan Singh, Bhagat Singh’s Ludhiana-based nephew

It is said that after the death of Maharaja Ranjit Singh, the East India Company officials started suppressing people. So, to protect themselves, people took up arms. During the 1857 revolt, the British government requested Fateh Singh for help against the rebels, but he refused to oblige.

“Since then, the house has been an epitome of great values and resistance to the colonial rule exhibited by the family,” said Prof Jagmohan Singh, Ludhiana-based nephew of Bhagat Singh.

Prof Singh said it was after a great struggle that he managed to get the house converted into a protected monument in the 1980s, as many questioned the connection of Bhagat Singh with the house, claiming that he never visited the place. The truth is though Bhagat Singh was born and brought up in Faisalabad (now in Pakistan), he used to visit the house regularly, along with his grandfather Arjan Singh. He had many fond childhood memories associated with the house, Professor Singh said.

Throwing light on his struggle to protect the house, Prof Jagmohan said: “While the portraits of Bhagat Singh have made their way to the offices of politicians, especially those from Punjab, who make a beeline to Khatkar Kalan village on every birth and death anniversary of Bhagat Singh or during elections, the martyr gets effaced from their memories in a matter of days.”

A walk through the past...

As per information, Bhagat Singh’s mother lived in this house till 1975, but it was in 1982, that the house was declared a monument under the Punjab Ancient and Historical Monuments and Archaeological Sites and Remains Act, 1964. After that the family handed over its responsibility to the government to preserve it as a national monument. But the legendary freedom fighter’s house was relatively ignored for a long time. Sources say it was first in 2005, when the chappar (sewer pond) found in front of Bhagat Singh’s house was converted into a memorial park, but the structure of the house was not touched and one of its walls remained in bad shape and the paint peeled off from its lower walls owing to dampness. Prof Jagmohan Singh said: “The Department of Archives/ Culture used to be mostly out of funds whenever they were approached for restoration. It was like we had to beg in front of the government for grants even though the house’s upkeep should have been its job.” It was only in 2015 that the Department of Cultural Affairs, Archaeology and Museums, for the first time, started restoring the house since it was handed over to it in 1984 by the family. Before that, the local panchayat used to take care of the house. The house was restored at a cost of Rs42 lakh by the state government, he said.

Prof Jagmohan recalled that in 2017, when then Punjab Tourism Minister Navjot Singh Sidhu went to the village to take stock of the ongoing museum work at the village, he handed over a cheque for Rs2.5 lakh from his ministerial funds to then Deputy Commissioner Sonali Giri, in favour of Punjab State Power Corporation Limited (PSPCL), as the state government miserably failed to clear the power bills of freedom fighter Bhagat Singh’s house and of the memorial park. “Such was the plight of the house and ignorance of the state government,” he said. 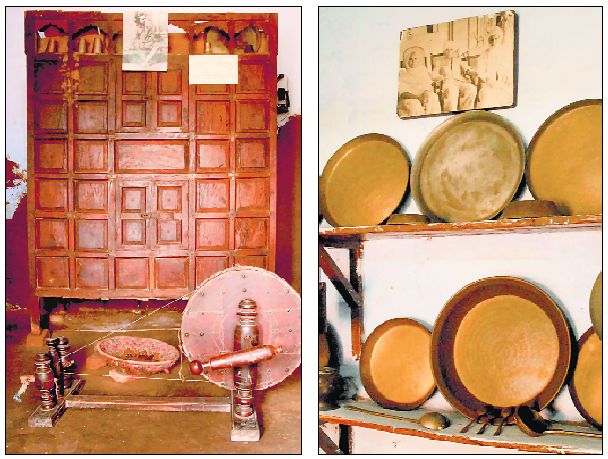 Items such as utensils, wooden boxes, a table, an almirah, some pictures, an old wooden bed with carving, a weighing machine, a charkha (spinning wheel), and a typewriter, which is said to be of historical importance and has links with the freedom fighter, have been put on display at the house.

It was in July 2015 that the state government hired a Chandigarh-based private firm to carry out the restoration work at the house in a way that it could attract more and more visitors. 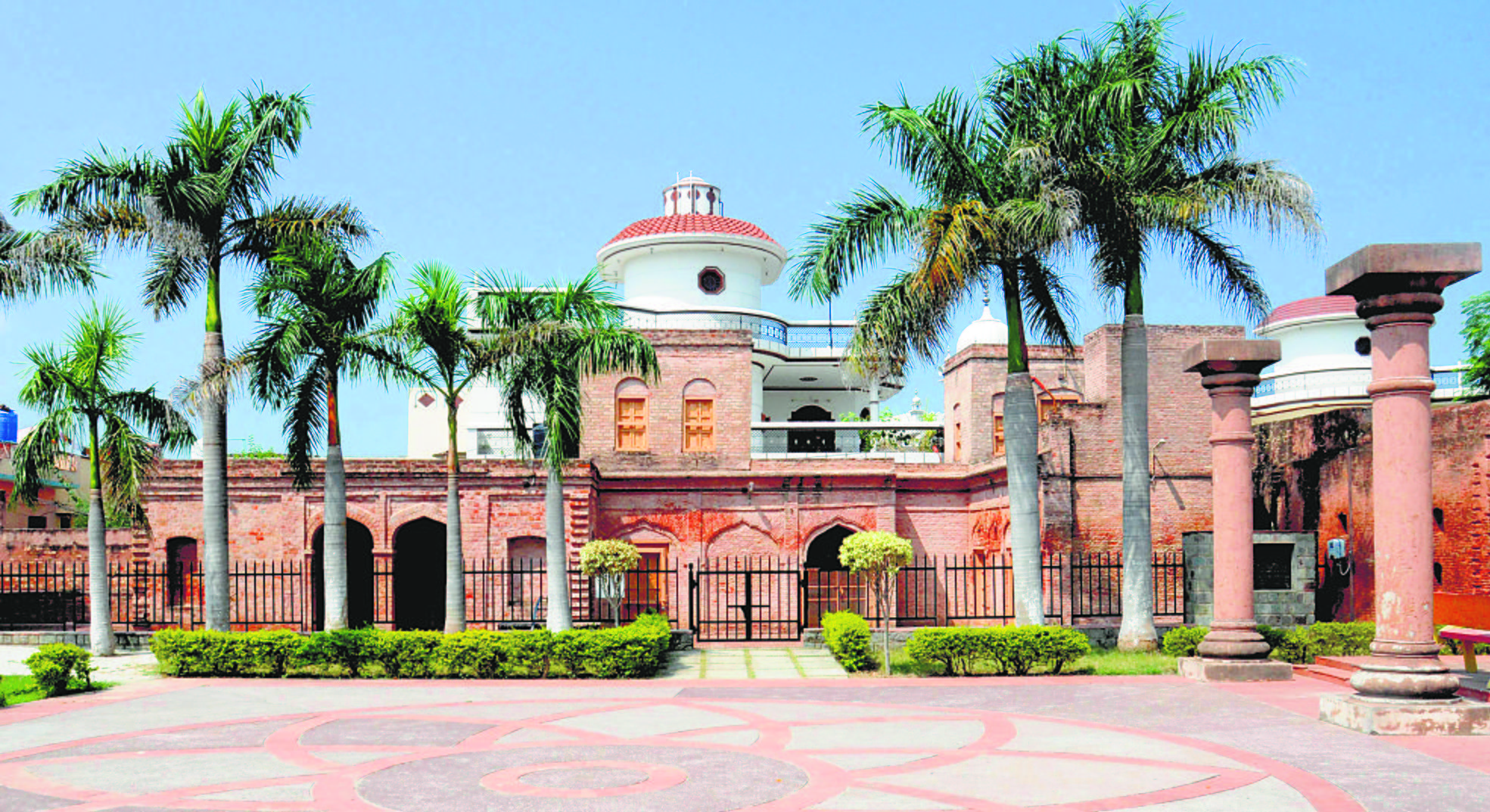 The restoration work was completed in 2016 and the roofs, which were in a dilapidated condition earlier, were removed and replaced with new ones keeping the original form. The walls of the rooms, kitchen have now been repaired with a special technique to strengthen these by restoring its historical value. The floors of the building were restored and its level has also been raised. Old doors and windows have been replaced with new ones. Special cabins for displaying the belongings of the martyr and his family have been made, so that these are not damaged by visitors by frequently touching it. The house has got a complete facelift and is one of the most visited places in Punjab.