Overcoming fear and understanding the science of the Covid-19

When my son and I tested positive, my kids had a lot of misgivings. Understanding the science of the coronavirus helped us sail through 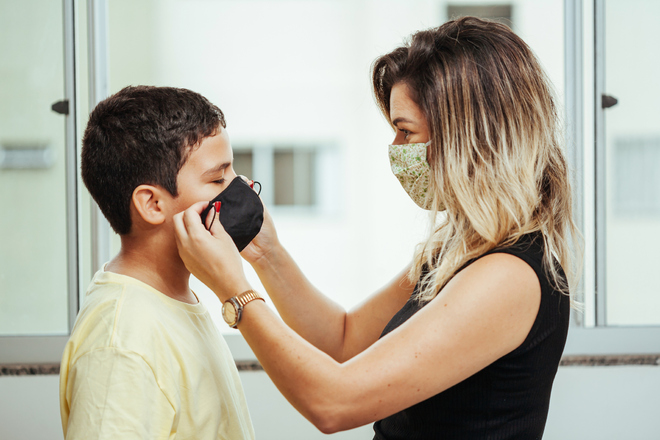 I had fever one day. Then breathing became difficult. I told my children about my sickness and that I would isolate myself in my room. Two days later, my Covid-19 test came positive. The medical officer who attended to me said my blood oxygen levels were not too bad, and there were no other serious conditions involved; it would be manageable from home. Her assurance put my mind at ease. The real test, however, was yet to begin.

Even before the lockdown in India, children grasped information on the potentially deadly disease. Thousands of deaths per day in Italy freaked out every household. The number of fatalities was discussed within the family and on phone calls. Adults all over the world consumed macabre stories of bodies piling up on the sidewalks with morning tea. Italy, followed by Spain, and then United States of America, the early information that our fear fed into our children was that the only escape from Covid-19 was death. Little did I know that as soon as I brought my positive diagnosis home, my children would be overwhelmed by the same apprehension.

My elder son, nine years old, could not sleep. His muffled voice reached my room late at night. He feared for his mother. Would she survive? Suddenly, he found himself in a dangerous, inescapable reality that society’s collective fear has built up over the months.

Nothing would happen to me, I told him. Why his mother would be an exception when the rest of the patients had died, he asked. To make the situation worse, my younger son tested positive two days later. Sleep became more elusive to all three of us. It was time for us to talk about Covid-19 from the perspective of survival rate rooted in reason.

According to Johns Hopkins University, the observed case-fatality rate for India is 1.8 per cent, which means 1.8 people die per 100 confirmed positive cases. That is, if the numbers reported are right. I looked it up after testing positive. People who are old and have co-morbidities are at a greater risk of ending up in the aforementioned percentage. Cardiovascular diseases, respiratory conditions and diabetes raise the chances of death by Covid-19. Since I do not have any of these, I was going to be among the 98.2 per 100 confirmed cases that survive. The comparison 98 to 2, for the sake of simplicity, was encouraging.

When chaos rules, control becomes necessary to bullet through difficult time. The younger one, who came out positive, is merely six years old. He said he did not want to die. His fear had foundation, and it was necessary to dismantle it. The foundation was the lack of control over the situation. Control comes through what one believes in. Our belief, in this case, came from the scientific knowledge available at the moment.

We talked about his health in general, and that he did not have symptoms. According to Centers for Disease Control and Prevention, 45 per cent of paediatric cases are asymptomatic. Those who require intensive care have underlying health conditions. He did not have any.

Actions set-up in a routine also drive control. Checking the vitals, taking the medication, eating balanced diet, drinking plenty of fluids, taking steam multiple times a day, washing hands, wearing a mask and maintaining physical distance from the rest of the family are some of the tasks that a Covid-19 positive child will have to do on a daily basis. When these tasks are discussed with underlying reason to perform each one, children do take on the responsibility of their own wellbeing pretty diligently. These concrete actions were in his control, and the daily routine based in these actions prevented him from brooding over the popular narrative around Covid-19.

Survival is an empty word without future. Children want to know what they are looking forward to. What will they do after they test negative? Every evening, we talked about the future — travelling, visiting favourite people, and meeting classmates. Life after beating the disease is full of prospects.

It can be tricky to manage the fears of children who have underlying conditions. But again, fear can’t drive the narrative. My older son, who tested negative but has asthma, started taking his condition seriously. He set up his bronco-inhaler, stopped eating cold and icy things, and cleaned his room for allergens. For Covid-19, he mirrored what we were doing.

Reason must prevail over fear. Children need assurance and confirmation that they and their loved ones will sail through the disease. To effectively be the driver of a positive narrative, a parent will have to start from herself first — from scientific knowledge to reason to control. It’s the least we, as parents, can do to channel the chaos around the known and the unknown.