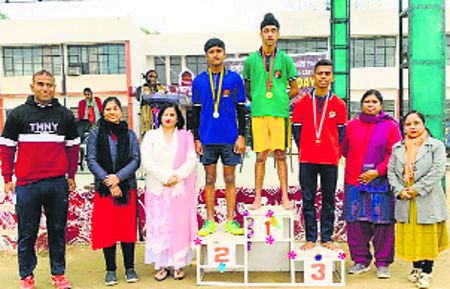 Ambala: Kendriya Vidyalaya-3, Ambala Cantt, celebrated its Annual Sports Day with pomp and show. Principal Seema Mahindru started the event by hosting the flag. She congratulated the students on their academic and sports achievements throughout the year. Students of primary, middle and senior wings participated in various events such as frog race, relay races and tug of war. Tagore House won the overall trophy. Sports teacher Vishal Singh was appreciated for his contribution.

Sonepat: Former Vice-Chancellor of Haryana Central University, Mahendragarh (Haryana), Prof Mool Chand Sharma has urged people to be aware of their rights for preserving the democracy and force the elected representatives and government officials to reply to the questions raised by the public on such issues. He was addressing the concluding session of the 14-day Refresher Course on 'Law, Human Rights and Social Changes' organised at UGC's Human Resources Development Centre (HRDC) at BPS Women University, Khanpur Kalan (Sonepat). Jagdeep Singh Chhokar, retired Professor from Indian Institute of management, Ahmedabad, and Dr Shaifali Nagpal, Director of the HRDC, also spoke on the occasion. As many as 25 representatives from different areas participated in the course.

Karnal: Students of Sainik School, Kunjpura, has produced remarkable results in the UPSC NDA/NA ll-2019 written examination held on November 17. The school is ranked third among 31 Sainik Schools across the country. In all, 26 out of 61 cadets have qualified for interview, which is to be conducted by the services selection board (SSB), Ministry of Defence, for admission in Army, Navy and Air Force wings of NDA for the 144th and 106th Indian Naval Academy Course (INAC), which will begin on July 2, 2020.The result is a marked improvement from the last year, where 22 out of 65 cadets had cleared the written examination. Principal Col VD Chandola extended his compliments to the cadets, officers and staff for bringing laurels to the school. He encouraged the cadets by telling them that they are halfway through their goal and all they need to do is prepare hard for the upcoming interview. He urged them to put in their best efforts and bring Raksha Mantri Trophy for the tenth time.

Ambala: The NSS units of Maharishi Markandeshwar (Deemed to be University), Mullana, organised dental and health check-up camps in Sarakpur village and Sohana village, respectively, on the fourth day of the NSS camp. The 7-day-long camp is being organised under the instructions of Chancellor Tarsem Kumar Garg, Secretary Sanjeev Garg and Treasurer Vishal Garg. Karan Aggarwal coordinated for the event. As many as 112 patients were checked during the dental check-up camp and 128 were checked during the health check-up camp.

Karnal: Students of Mount Litera Zee School organised a digital awareness rally on cyberbullying in the digital literacy week. The students were taught about different aspects of leading a secure life according to its 'I- care' guidelines. Chairman of NIFAA Pritpal Singh Pannu inaugurated the rally. People showed their quest for knowledge about safety in the virtual world and it was explained well by the literans. The students said cyberbullying amounted to harassment and bullying, which was executed through digital devices such as computers, laptops, smartphones, and tablets.