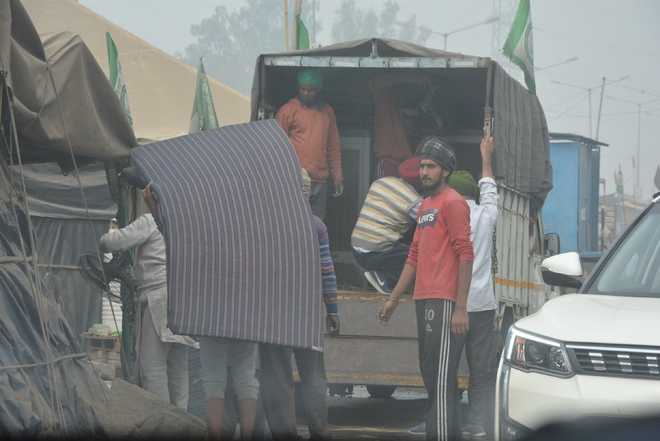 Farmers pack up their belongings at Singhu. Tribune photo

The atmosphere at Singhu, one of the epicentres of the farmers’ movement, has changed after the Centre scrapped the three farm laws. The protesters have started preparations to return to their homes, but are awaiting the final call of the Samyukt Kisan Morcha (SKM).

The farmers could be scene busy packing their coolers, pipes and other articles on Thursday. Some of them also started uprooting their tents and sheds. They are hoping that the SKM will now call off the stir on Saturday.

A festive atmosphere has been prevailing at Singhu since the repeal of the laws.

The scenario at the main stage of the SKM has also changed in the past two or three days. Despite long speeches, the SKM has now started felicitating people, social organisations, langar organisers and others who supported the movement.

It has scheduled a meeting on Saturday, in which it can announce its final decision about the fate of the farmers’ movement.

Jagpal Singh of Sangrur said, “We are ready to go back to our homes, but are just waiting for the announcement from the main stage.”

Some tractors have already started journey to Punjab and even some people have called their trucks to load their goods, he said.

Another farmer Birender Singh of Gurdaspur said the laws had been scrapped but some other demands were pending, which could be fulfilled in a day or two.

Nihang group head Baba Raja Raj Singh said the preparations to head back had been started. The Nihangs will hold an ‘Akhand Path’ and a press conference at the Singhu border on Saturday.

Harinder Lakhowal, general secretary, BKU (Lakhowal), said the main demand of the farmers had been fulfilled and now some others, including legal guarantee for the MSP and cancellation of the cases against the farmers, were still pending. “The government should fulfil these demands soon so that we can return home,” he added.