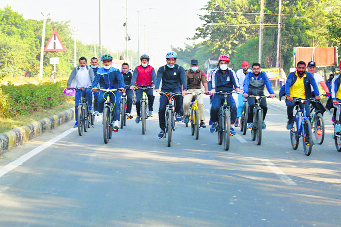 With an aim to promote cycling and to create awareness about fitness, Cyclothon-2020 was organised in the city under the ‘cycling for a change’ challenge by Smart City Limited.

The cyclothon started from Sector-8 and ended at the same place after passing through various roads of the city on Sunday.

Counting the aims of this initiative, the DC said that one should adopt cycling to save the environment from pollution as the number of vehicles on the roads was increasing day by day. “We have taken up cycling for a change concept which will encourage people to adopt cycling,” the DC maintained.

He appealed to the residents to adopt cycling in their daily routine so that the environment could be saved and people’s health could be maintained. SP Punia also encouraged people to cycle and also appealed to them to say no to drugs.

A signature campaign was also launched. The DC and SP administered an oath against drugs to the people present there. — TNS