Farmers forced to go to other districts 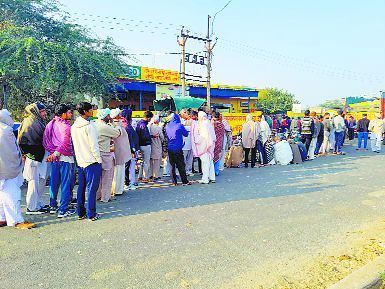 Farmers queue up to buy DAP at an IFFCO outlet in a Rohtak village on Monday. Tribune photo

The state leadership’s claims of adequate availability of DAP in the state notwithstanding, its shortage persists in Rohtak district.

Long queues of farmers have been seen at IFFCO outlets in villages since early morning, even before the opening of the outlets. It may be pertinent to mention that DAP is particularly required at the time of the sowing of wheat, which is going on in full swing these days.

Farmers Narender and Balwan of Madina and Parveen of Bahu Akbarpur village in the district also narrated similar tales regarding the shortage of DAP.

“The government claims that there is no shortage of DAP. If it is really so, why are farmers, including women, still standing in queues to get it?” asked former Chief Minister and Leader of Opposition Bhupinder Singh Hooda.

Meanwhile, in a letter to the Chief Minister, the state chapter of the Bhartiya Kisan Sangh has complained that the sowing of wheat is on and the requirement of DAP is high, but it is not available at the government outlets. “Certain private dealers are selling DAP in the black market. The officials concerned have been informed of such cases, but to no avail. Adequate stock of DAP should be made available so that the farmers can sow wheat in time,” stated the sangh in the letter.