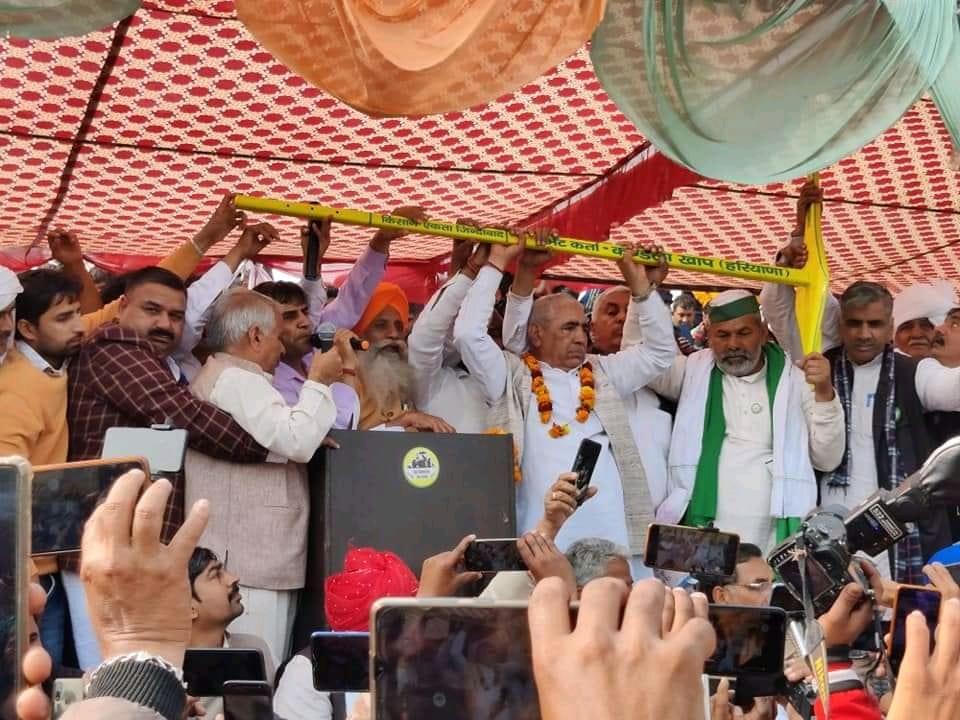 Farmer leaders at the khap mahapanchayat in Jind on Wednesday.

The mahapanchayat in the presence of farmer leaders Rakesh Tikait, Gurnam Singh Charuni and Balbir Singh Rajewal demanded repeal of the three laws, making a law to ensure minimum support price, waiving of the loan of the farmers, implementation of the Swaminathan Commission recommendations and to withdrawal the criminal cases registered against the farmers in Delhi on January 26.

A large number of farmers gathered at the mahapanchayat hosted by the Sarv Jatiya Kandela khap near Jind.

A 'Mahapanchayat' is underway in Jind. pic.twitter.com/rBwbfo0Mm1

Kandela village, located about 10 km from Jind, is the headquarters of the Kandela khap which has influence in about 20 adjoining villages. People from these villages have been providing logistic support and the manpower to the ongoing farmers’ stir near Delhi borders for over two months.

Following the emotional outburst by Tikait on Thursday, farmers from the region, including Kandela village, had rushed to the Ghazipur border after which the agitation got strong and the government authorities who are mulling to remove the farmers from the dharna site, had to retreat.

Tekram Kandela, pradhan of the Kandela khap, said the farmers from the village immediately started a tractor march to the Delhi border when the video of Tikait breaking into tears went viral on social media on January 28 as the government was planning to launch a crackdown on Tikait and other farmers sitting on dharna at Ghazipur.

Overwhelmed by the support from Haryana, Tikait called Tekram Kandela and decided to hold a meeting at Kandela village. The khap pradhan said they had invited all the khap panchayats of Haryana for the meeting and expected a huge turnout.

He said they had demarcated seven acres of land near the chabutara of Kandela khap in the village and made preparations for providing food and water to the participants.

Kandela village was also the centre of farmers’ agitation in 2002 against the then INLD government on the issue of power bills.

The stage on which the farmer leaders were sitting also collapsed, according to a report by news agency ANI.