In Jind, another new road caves in 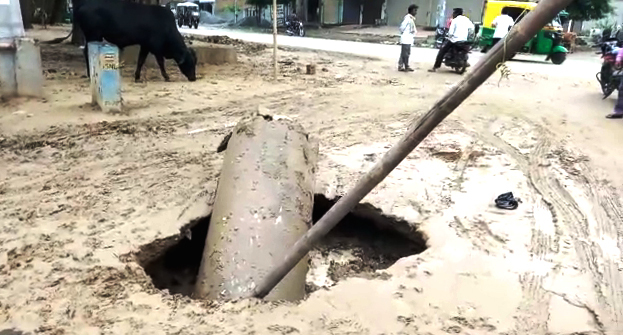 The caved-in portion of the newly built Apollo road in Jind.

Exposing the poor civic infrastructure in Jind, a portion of the newly built Apollo road here caved in on Sunday.

Earlier, a stretch of the newly constructed Rohtak road had washed away after which the local BJP MLA had complained the Assembly Speaker, who sent a team of legislators for inspection last month.

The crater, caused suddenly on Sunday, in the middle of the road has put the commuters at risk. “There have been many incidents in the town in the past when new roads had caved in, which indicates large-scale corruption in the construction works undertaken by the authorities,” alleged Rajkumar Goel of the Jind Development Organisation, an NGO.

He alleged that similar incidents had occurred on Rohtak Road, Dalamwala hospital road, Patiala Chowk and now on Apollo Road. “Even after repeated complaints in this regard, no action has been taken against any officer of any department. The situation is so bad that the entire department should have been suspended,” Goel added.

Notably, on the complaint of BJP MLA from Jind Krishan Middha, a subject committee of five MLAs inspected the civic infrastructure of the town and submitted the report to the Assembly Speaker in Chandigarh last month. The district administration, too, was alerted after which it sought the records and physical inspection report from its agencies about the material used in construction works and total budget for the projects.