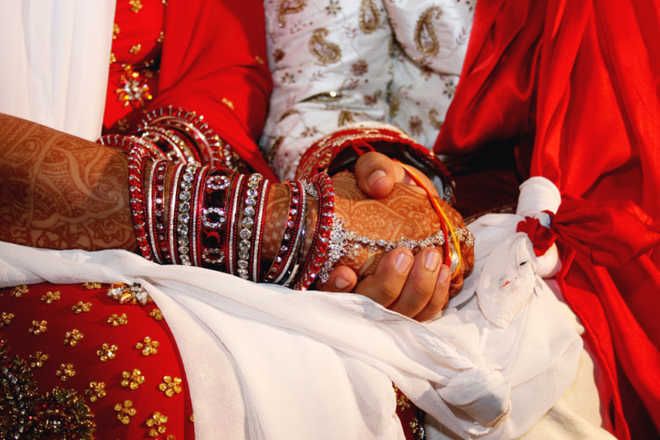 When a couple told the Punjab and Haryana High Court that they had tied the knot in a hotel room by exchanging garlands and performing “saptapadi” after lighting fire in a utensil, little did they know that a cost of Rs 25, 000 would be imposed on them for attempting to mislead the court.

Justice Gurvinder Singh Gill was told that the “bride”, 20, and the groom, over 19, were seeking directions to the State of Haryana and other respondents to protect their lives and liberty as they were apprehending threat from the “bride’s” relatives for marrying against their wishes.

The couple exchanged garlands and ‘saptapadi’ was performed by lighting fire in a utensil in a hotel room, but sermons weren’t chanted by anyone during the ceremony. —Justice Gurvinder Singh Gill, HC

The petitioners’ counsel claimed that they had solemnised marriage on September 26 after running away from their houses. But neither marriage certificate, nor photographs of the ceremony, was annexed. Even particulars regarding the venue were missing.

Justice Gill initially adjourned the matter to enable the petitioners to furnish the requisite information. As the case came up for resumed hearing, the Bench observed that the “groom” was not of marriageable age. It was apparent that the petitioners made an attempt to mislead the court. They came up with a plea that they stayed in a hotel. The boy applied vermilion or sindoor on the girl’s forehead in the room. They exchanged garlands and “saptapadi” was performed by lighting fire in a utensil in the same room. But sermons were not chanted by anyone while “saptapadi” was performed.

“The explanation appears to be an attempt to cover up the fact that in fact there was no valid marriage between the petitioners though it has been stated so in the petition. This court can hardly appreciate such like conduct on the part of the petitioners who, in order to get relief from court, have tried to mislead the court,” Justice Gill asserted.

Before parting with the case, Justice Gill added that the court could not shirk from its duties to secure and protect the lives and liberty of the petitioners in case of genuine threat As such, the petition was disposed of with a direction to the Commissioner of Police concerned to look into the matter and to dispose of a representation on the issue expeditiously in accordance with the law.

“Keeping in view the fact that the petitioners have not approached this court with clean hands and have rather made an attempt to mislead the court, the petitioners are burdened with costs of Rs 25,000 to be paid in the High Court Legal Services Committee,” Justice Gill concluded.