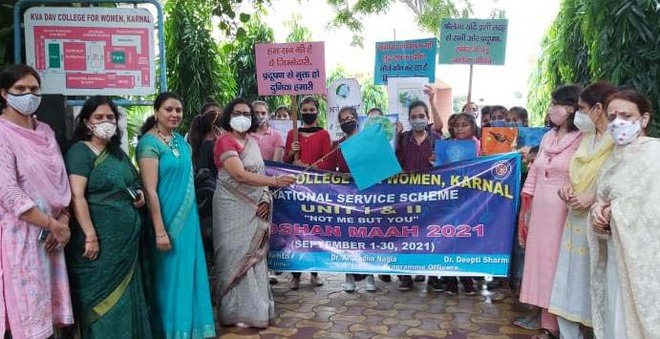 Karnal: NSS units of KVA DAV College for Women, Karnal planted saplings on the college campus under the banner Poshan Maah 2021 by Women and Child Development Department, Haryana. Principal, Renu Mehta appreciated the endeavour and addressed the NSS volunteers deliberating upon the importance of trees in everyone's life and the role of youth in motivating the society about the benefits of green earth. The programme officers Dr Anuradha Nagia and Dr Deepti Sharma, advisory committee of NSS Sunit Bhandari, Dr Sushma Thakur and Dr Sabira Sharma, member Dr Sunita Salaria and 15 volunteers participated in the plantation drive and rally.

Karnal: The Haryana Government has announced the selection of Prof Moti Lal Madan, a distinguished veterinarian and reproduction bio-technologist, for the prestigious State Vigyan Ratna Award for 2020. The highest state science and technology award is given to honour eminent scientist who has made outstanding contribution in the field of Science and Technology and the award carries a cash prize of Rs 4 lakhs, a citation and a trophy.

Faridabad: The DAV Institute of Management, Faridabad observed World Brotherhood Day recently to honour the historic speech delivered by Swami Vivekananda on this day in 1893 in Chicago before the delegates of the World Parliament of Religions. This event was organised by Vivekananda Kendra Kanyakumari, Faridabad branch. Harish Ratra, president of foundation against thalassemia, said the motive behind the event was to inspire students by thoughts of Swami Vivekananda.

Sonepat: Following the 2021 Global Hand Washing Day theme "Our future is at hand let's move forward together," Hand Wash Day and Personal Hygiene Day was celebrated in KV GCCRPF Khewra of Sonepat. Principal Aman Gupta explained the importance of hand wash and personal hygiene to the students. The demo for the activities was given by the senior most staff members Sandeep and Sumit. Sumit explained to the students the right way to wash their hands.

Karnal: With a view to inculcate the sense of responsibility towards society and environment among the cadets - the social service activity cleaning of statue "Shaheed Udham Singh" adopted by 7 Haryana Battalion NCC Karnal was done by NCC senior wing cadets of Pratap Public School, Sector 6, Karnal. The cadets were taken to the spot and were explained about the role of the martyr in the freedom struggle of India and how he sacrificed his youth for his motherland.

Yamunanagar: Mukand Lal National College, Radaur organised its silver jubilee blood donation mela in which 158 units of blood were collected. Dr Deepak Kaushik, officiating principal of the college, said the noble act was conducted under the supervision of a team from AIIMS. Gian Parkash Sharma, general secretary of the college governing body, commenced the programme by lighting of the lamp.

Yamunanagar: Seth Jai Parkash Polytechnic, Damla in Yamunanagar has been adjudged as the "outstanding polytechnic" of the northern region (consisting of nine states) for 2020-21 at a function held at the National Institute of Technical Teachers Training and Research (NITTTR), Chandigarh. The 'Outstanding Institution Award' and citation has been presented to Anil Budhiraja, principal of the polytechnic. Dharmendra Pradhan, Union Education Minister was the chief guest on this occasion.

Faridabad: JC Bose University of Science and Technology, YMCA, Faridabad has maintained its excellence among the government universities of Haryana in the field of technical education. In the latest ranking released by the National Institute Ranking Framework (NIRF) 2021, the university has been ranked best among State Universities and Institutes of Haryana in the engineering and management category. The spokesperson said the YMCA university had been ranked 127th in the engineering category as per the NIRF ranking list released by the Union Ministry of Education.

Karnal: Pratap Public School, Jarnailly Colony, Karnal celebrated Hindi Diwas to commemorate and celebrate the popularity of Hindi throughout the country. The students were apprised about the different eras of Hindi literature through an one act play. Students spoke about renowned writers, poets and their works. It was a commendable way to express the importance of Hindi language. Director principal Poonam Navet appreciated the efforts of the students.