Sarpanches meet in Karnal, to intensify stir against e-tendering : The Tribune India

Sarpanches meet in Karnal, to intensify stir against e-tendering

Decide to hold state-level agitation at Jasia on Jan 28 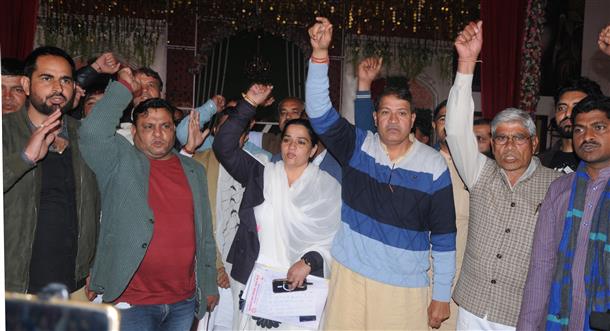 Sarpanches raise anti-govt slogans after a meeting in Karnal on Wednesday. Tribune photo

The sarpanch association of the state on Wednesday announced to intensify the agitation against the government decisions on e-tendering and ‘right to recall’.

At a state-level meeting organised here, the sarpanch association announced to hold a state-level protest at Jasia in Rohtak on January 28 to show their strength. Besides, they announced to burn the effigy of Development and Panchayat Minister Devender Singh Babli at the block level on January 29, the day on which the BJP is going to hold a rally in Gohana, which will be addressed by the Union Home Minister Amit Shah. After burning effigy, sarpanches would block roads across the state, the association added.

Ranbir Singh, who chaired the meeting, said they were demanding the withdrawal of e-tendering in the development works at villages and the ‘right to recall’, but the government was not paying heed to their demands. “We will continue our protest till the fulfilment of our demands,” he added.

“On January 28, we will hold a protest at Jasia to give a message to the government that all sarpanches are united on the issue,” said Rattan Singh, a sarpanch.

“Our 25-member committee met here in Karnal today, which has decided to intensify our protest. We want the immediate withdrawal of e-tendering. The limit of the development works to be done by a sarpanch should be hiked to Rs 30 lakh from 20 lahk earlier,” he demanded.

“People of the rural belt are waiting for the development works for the past two years as there were no panchayats in villages. We have promised works to people, but the government has fixed a limit of Rs 2 lakh for development works to be done by a sarpanch, which is a meagre amount,” the association said.