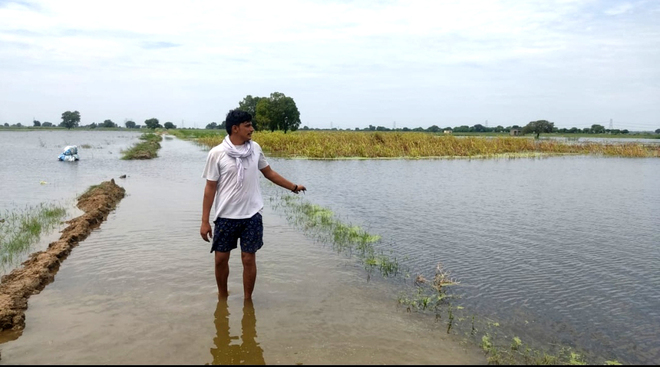 A farmer in his flooded field in Rohtak’s Samchana village.

Over 21,000 farmers have sought compensation under the Pradhan Mantri Fasal Beema Yojana (PMFBY) for the losses suffered by them for their cotton and bajra crops in Rohtak, Jhajjar, Rewari and Mahendragarh districts due to the accumulation of rainwater in their fields in the past 10 days.

In Rewari district, around 12,000 farmers have filed complaints with the Agriculture Department, while 4,800 complaints from Jhajjar, 3,000 from Mahendragarh and 1,800 from Rohtak district have been received.

The farmers are bound to file a complaint within 72 hours of the losses to get compensation.

“There are 82 villages in Rewari district from where complaints of waterlogging in more than 25 per cent of the total insured area under the PMFBY have been received. Among these, 48 villages are located in the Jatusana block, 15 villages in Nahar, 10 villages in Rewari and eight villages are in the Khol block. Our teams in all blocks are working to verify the complaints,” said Balwant Singh, deputy director, Agriculture (DDA), Rewari.

A majority of the villages under the Salhavaas block in Jhajjar district have been badly hit by the rains, while all five blocks are equally affected in Rohtak district due to waterlogging.

“Our 20 acres of agricultural land is flooded with knee-deep water, resulting in extensive damage to bajra, jowar and paddy crops. Hundreds of acres of other agricultural land in the village are also submerged under rainwater, but the authorities are not bothered about draining out the stagnant water,” said Ashish, a distressed farmer of Samchana village in Rohtak.

Dr Inder Singh, DDA, Rohtak, and Jhajjar, said a survey had already been conducted in around 50 per cent of the complaints to verify the losses, while Vazir Singh, DDA, Mahendragarh, said the survey report of 1,700 of the 3,000 complaints had been uploaded on the portal so that the insured farmers could get the compensation at the earliest.