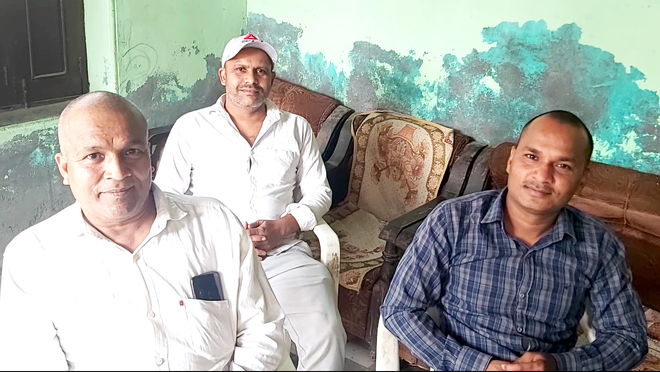 The decision of six Muslim families of Danoda Kalan village to convert to Hinduism has enthused activists of Hindu outfits. Muslims of the region are reluctant to talk on the issue.

As many as 35 members from the families of six brothers converted to Hinduism when they cremated an elderly person of the family at a Hindu cremation ground on April 18. The family of the deceased took a deliberate decision and announced that they are converting to Hinduism on the occasion.

Raj Kumar Ahlawat said they belonged to the Mirasi Muslim community and had now embraced Hinduism. “It was just a thin ritualistic line of how we dispose ofour dead which was standing between us and Hinduism,” said Ahlawat, a newly initiated Hindu, adding that the demise of his father Nek Chand marked their move to Hinduism.

“We have been earning our livelihood working as ‘Doms’(traditional singers). We have mentioned our caste as Hindu Dom, a Scheduled Caste in the Hindu system, in our educational documents and are also getting quota benefits.” Ahlawat works as ‘munshi’ in the local ‘gaushala’ and is an artiste who sings in ‘Saangs’, a folk song and dance theatre. He sang the songs of Pt Lakhmi Chand and Pt Mange Ram for several years in ‘Saang’ events.

When The Tribune asked him about the immediate provocation to change his religion, Ahlawat said the Tablighi Jamaat episode pained them and they decided to convert for good. “We are feeling greatly relieved after embracing Hinduism,” he said.

Village sarpanch Purshotam Sharma, who is a BJP supporter, said that there was no pressure on anybody to practice any religion in the village. “We came to know that Muslim (Teli) families had expressed their resentment to the conversion decision initially. But there is no ill will now and some of them (Muslims) are even keen to follow suit,” he claimed.

Muslim families belonging to the Mirasi, Teli and Lohars communities distanced themselves from the decision of the six families to convert to Hinduism stating that it was their personal decision.

Naseeb Singh, a political activist who contested and lost the previous poll for the post of sarpanch in the neighbouring Danoda Khurd village maintained, “The conversion was a matter of discussion for a couple of days. But nowadays, nobody likes to meddle in the affairs of others. We are least bothered about the matter,” he said. Significantly, belonging to a Mirasi Muslim family, Naseeb contested the poll as an SC candidate.

Raghbir Singh, a Teli Muslim and father of three children who go to a private school, maintained that changing one’s religion is not a good decision at all. “But we cannot interfere in the matters of others. We will not be attending their family functions and events as they have exited Islam,” he said, adding that there could be some kind of coercion behind this decision by the families.

He said Naseeb maintained that there is no religious leader in the twin villages of Danoda Kalan and Danoda Khurd that have about 15 Teli, 30-40 Lohar and 100 Mirasi families of the Muslim community.

Harphool Khan Bhatti, president, Haryana Muslim Kalyan Committee, stated that the community of Mirasi Muslims are taking the benefit of the SC category which is part of Hinduism. “These families are from the Mirasi community. I came to know that they inclined towards Hinduism to take quota benefit and they took the decision at this time,” he said.