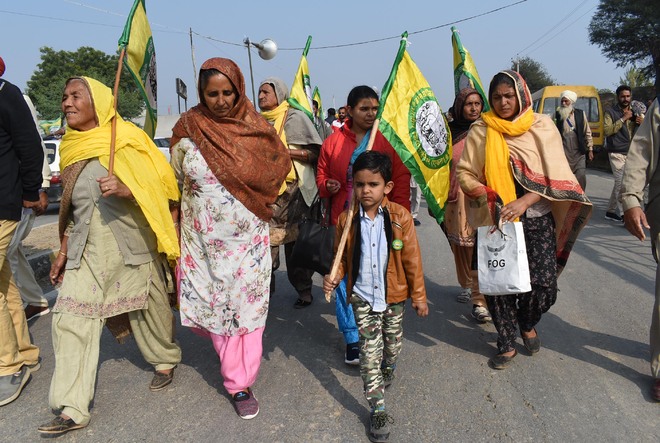 A child along with women activists protests at Dabwali: Tribune photo

The ‘Delhi Chalo’ agitation has got an overwhelming response from women, children and youth as a large number of them have come out from their homes to participate in the protests taking place across the state.

Six-year-old Shahbaz Singh of Chak Fatte Singhwala village reached the protest site holding a farm union flag. While talking to The Tribune, Shahbaz said, “The Modi government is taking away our rights due to which I have come with my family to protest against the black laws.”

School-going girls and youth were also seen carrying flags in their hands, raising slogans against Prime Minister Narendra Modi and the Union Government over the laws.

BKU (Ekta Ugrahan) women wing president Harjinder Kaur Bindu, the force behind motivating women in the region, said around 25,000 women were participating in the stir. “We have run a campaign by holding ‘jago’ and ‘mashal marches’ in 800 villages in the region to encourage women and youth for the protest. With women coming out, our fight has become stronger.”

Tarjinder Singh, a youth of Tarkhanwala village in Bathinda, said, “Our family income is dependent on farming and with these laws, we will not get a good price for our produce as big corporates will take away our land. This is the time where each and every Punjabi should come and support farmers and protest against the Modi government.” Several specially abled persons were also seen at the protest sites.