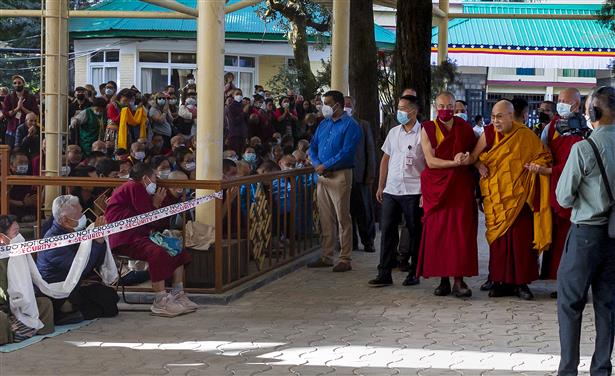 People from 55 nations listened to the sermons of the Dalai Lama at the Main Tibetan Temple in McLeodganj. Photo: Kamaljeet

About 5,000 tourists from 55 countries are attending the teachings of the Dalai Lama that started at the main temple of the Tibetan spiritual head in McLeodganj yesterday.

The teachings are being held from October 3 to 5. It’s after about two years, the Dalai Lama is giving live teachings to domestic and foreign devotees. As many as 570 disciples of the Dalai Lama have come from Taiwan.

“The majority of people having attachment to ordinary pursuits and lacking in the requisite strength of intellect have no interest in discourses,” the Dalai Lama said.

“These days, people are absorbed in pursuing a materialistic way of life. While all traditions teach us to be kind, the Nalanda Tradition urges us to use our intelligence to examine what disturbs our peace of mind,” he said.

The arrival of disciples in McLeodganj has also brought in good business for the local tourism industry. Sanjeev Gandhi, general secretary of the Smart City Dharamsala Hotel and Restaurant Association, said, “We all are lucky to have the Dalai Lama in Dharamsala. We pray for his long life.”