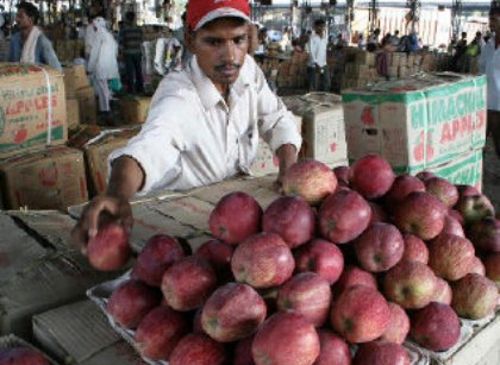 The apple market has slowed down after over two months. Apple growers are claiming that the price per box has dropped by nearly Rs 1,000 since the start of September.

The apple market has slowed down after over two months. Apple growers are claiming that the price per box has dropped by nearly Rs 1,000 since the start of September. Most of them suspect manipulation by marketing forces behind the sharp fall.

Individuals on the buying chain, however, cite the arrival of more fruit, floods in various part of the country, start of the season in Kashmir, poor quality of apple as the reasons for the slump.

Growers, however, aren’t convinced. Their question is how could price drop so drastically all of a sudden when the total crop this year is estimated to be just half of last year’s produce?

“The average prices have dropped by Rs 1,000. It can’t be just demand and supply, there’s definitely something else influencing the price,” said Sandeep Reakta, an orchardist from Kotkhai.

Harish Chauhan, president, Himachal Pradesh Fruits, Vegetables and Flowers Growers Association, said “The fruit from medium and higher altitude is more suitable for storage. So it’s bought at a cheaper rate, stored and sold at huge profits after March. Since there’s no point in storing fruit bought at high prices, the market is conveniently manipulated to bring down the prices,” he alleged.

NS Chaudhary, one of the oldest arhtiyas at the Dhalli Fruit and Vegetable Mandi, finds the allegations outlandish. “I don’t know how open bidding could be rigged or manipulated,” said Chaudhary.

“Demand and supply fix the price. At the start of the season, the remuneration is better because there’s less fruit and the competition among the loaders is more intense. The market is bound to see some price correction after the fruit arrives in bulk,” he said, explaining the fall in price.

Agriculture Produce and Marketing Committee chairman (Shimla and Kinnnaur) Naresh Sharma, too, rebuffs the allegations. “I can understand some foul play at one or two places, but how could you manipulate price in all mandis,” he asks.

Whatever may be the reason for the slump, the fact remains that growers have little say in determining the price of their produce. The HP State Agriculture Marketing Board managing director sees growers having some control over the supply of fruit as a way out from this situation. “We are building a controlled atmospheric store in Parala and other places. These stores will help growers hold back their crop when there’s glut in the market,” he said.