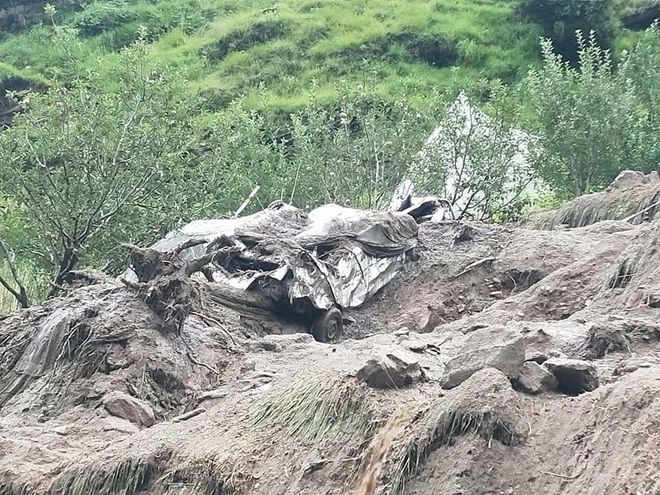 A vehicle that was swept away in Anni subdivision on Saturday.

Slush and water brought in by a cloudburst in the higher reaches caused extensive damage to private and government property and crops in Khadvi, Tarala and Sarat villages of Buchher panchayat in Anni subdivision of Kullu district in the wee hours today. Two vehicles were swept away and the Gugra-Jaon-Tarala road was blocked near Sanwasar.

Buchher panchayat vice-president Bhup Singh said orchards, agricultural fields and some houses were damaged due to the ingress of slush and water. He added that there was an atmosphere of panic among the people, who moved to safer areas in time, otherwise there could have been the loss of human lives as well.

Anni Tehsildar Dalip Sharma said that a team of the Revenue Department visited the area to assess the damage caused and prepare a report.

Apple and other fruit orchards have suffered heavy damages. Crops have been completely destroyed. Some houses have become vulnerable due to the flood and residents are in the grip of fear. They have appealed to the government to provide them adequate compensation for their losses due to the natural disaster.