Lays foundation stone of projects worth Rs 91.16 crore in Pachhad 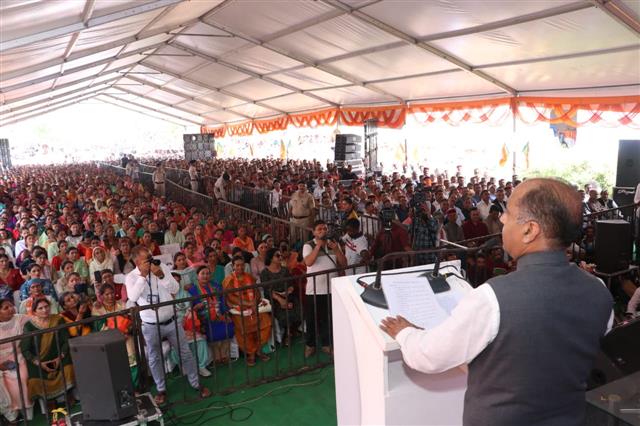 Chief Minister Jai Ram Thakur today questioned the Congress for promising the old pension scheme (OPS) to government employee. He said that why the party had not been implemented the OPS in Congress-ruled Chhattisgarh and Rajasthan.

He said, “Why is the Congress now promising the OPS in Himachal ahead of the Assembly elections when it did not implement the scheme in Rajasthan and Chhattisgarh where it has own governments? It is making the announcement merely for electoral gains but people will not be misled.”

Thakur presided over a ‘Pragatisheel Himachal: Sthapna Ke 75 Varsh’ programme at Rohri in the Pachhad Assembly constituency of Sirmaur district and later at Barotiwala today. He laid the foundation stone of various development projects worth Rs 91.16 crore in Pachhad. He announced a new government girls senior secondary school for Rajgarh.

He said that the rights of the Scheduled Castes (SC) communities of the Trans-Giri area would be retained even after the grant of the tribal status. He added, “When locals has nick-named him as mama (uncle), the Hattee’s demand for tribal status will be addressed soon.”

Thakur said that in the past 75 years, there had been overall development in Himachal Pradesh in all spheres. He added that it was important to make the younger generation aware about the sacrifices made by our freedom fighters.

He laid the foundation stone of development projects worth Rs 8.78 crore in the Doon Assembly constituency, besides inaugurating projects worth Rs 16.75 crore. He directed Public Works Department (PWD) officials to enquire about the sub-standard work of the Ochghat-Neripul Chaila road after BJP president Suresh Kashyap brought it to his notice. Local MLAs and ministers Dr Rajiv Saizal and Sukhram Chawdhary and Suresh Kashyap were present on the occasion.