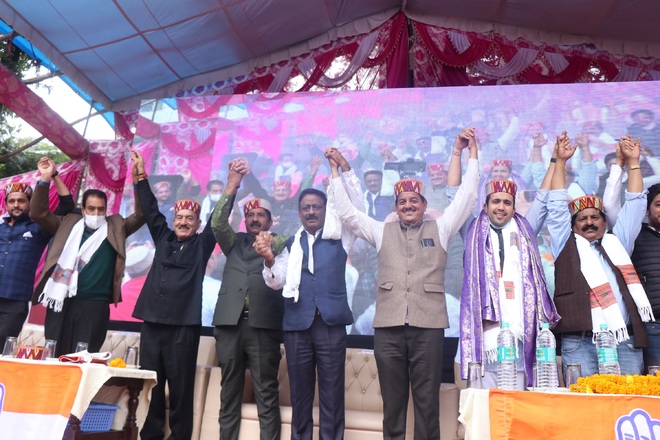 Taking the government to task, HPCC president Kuldeep Singh Rathore said that all sections of the society were feeling the brunt of the faulty policies of the government. The people were feeling cheated and were regretting voting for the BJP. The prices of all commodities were sky high. The unemployment was increasing while all development works had come to a halt.

Rathore asked the people who should be the candidate for Mandi Lok Sabha bypolls and people raised slogans in favour of former MP Pratibha Singh.

The Election Commission is working at the behest of the BJP and had postponed the by-elections indefinitely. The people are suffering from inflation and the government was unconcerned. The Jan Aakrosh rally had been launched from Kullu and such rallies will be held throughout the state. Mukesh Agnihotri, leader of opposition

Leader of the Opposition Mukesh Agnihotri alleged that the Election Commission was working at the behest of the BJP and had postponed the by-elections indefinitely. The people are suffering from inflation and the government was unconcerned. He said that the Jan Aakrosh rally had been launched from Kullu and such rallies will be held throughout the state.

Former HPCC chief Kaul Singh Thakur said that the days of the BJP government were numbered. He said that there was a lot of resentment among the masses and the people will oust the BJP in the Assembly elections.

HPCC general secretary and Shimla (Rural) MLA Vikramaditya Singh said that like Karnataka, Gujarat and Uttarakhand, the BJP can change the Chief Minister overnight in Himachal as well. He said the BJP postponed the bypolls due to the fear of defeat after receiving inputs from various agencies. He said that the masses of the state are frustrated with this government.