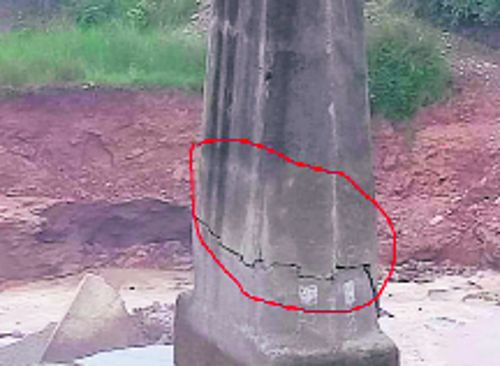 The cracks developed in a pillar of the Chakki bridge on Pathankot-Jogindernagar railway track.

Residents of rural areas of Kangra, who are dependent on the Pathankot-Jogindernagar narrow gauge rail services for daily travel, are fuming over the suspension of train services.

Satish Sharma, a resident of Panchrukhi, said the residents had written to BJP MP from Kangra Kishan Kapoor and Rajya Sabha member Indu Goswami. The railway authorities had suspended the services to the Kangra valley during monsoons. Now they were being told that the railway bridge over the Chakki river had been damaged due to which train services might remain suspended for a few more months, he said.

The suspension of train services has cut off many villages from the rest of the district. We have written to political leaders of the area. If they fail to get the services resumed, we will boycott them in the Assembly elections. — Kush Sharma, Resident

Kush Sharma, another resident, said in many areas of the Kangra region, especially those located in the Pong Dam wildlife sanctuary, there was no road connectivity. Students and teachers use train to reach their villages. The suspension of the services had cut off many villages from rest of the district. They had written to political leaders of the area. If they failed to get the train services resumed, they might boycott them in the Assembly elections, he said.

A pillar of the bridge over the Chakki in Nurpur has been damaged which has again brought illegal mining to the fore. The Railways, the PWD, IPH and farmers had been complaining of illegal mining.

Besides the railway bridge, the old road bridge over the river that connects Pathankot with Kangra district was also damaged due to illegal mining. The government had to construct a new road bridge.