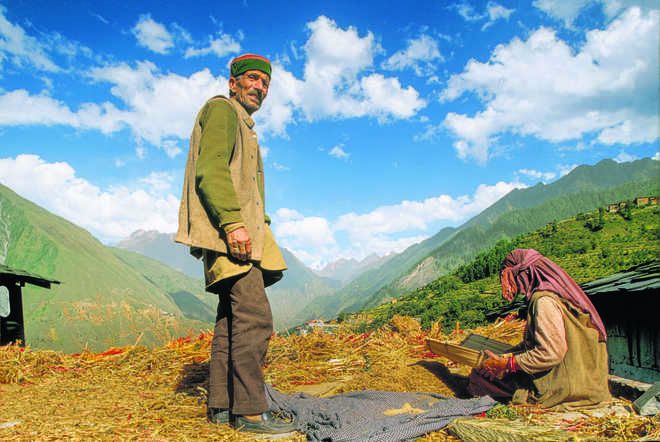 Farmers of Tandi and Sumnam villages in Lahaul and Spiti district have set an example by spending Rs 55 lakh from their own pockets to get water supply to irrigate their agricultural land. However, the state government has now come forward to bear 85 per cent of the total cost of the lift-water irrigation scheme.

Virender Kumar, pradhan of Tandi gram panchayat, says, “The lift-water irrigation scheme has cost around Rs 70 lakh. The farmers of Tandi and Sumnam villages have spent Rs 55 lakh from their own pockets while Tribal Development Minister Ram Lal Markanda has provided Rs 15 lakh for the project from his MLA funds”.

“The gram panchayat has sent a proposal of Rs 28 lakh for Sumnam village and another of Rs 27 lakh for Tandi village to the state government for approval under the Vikas Main Jan Sehyog scheme under which the state government will bear 85 per cent of the expenditure. The amount spent by the farmers will be reimbursed to them when the government provides Rs 55 lakh,” he adds.

This year, the Lahaul valley has experienced drought-like conditions since March, making farmers to worry about their crops. Due to the lack of irrigation facilities, the farmers of the area have to depend on seasonal rainfall for better yield. However, they decided to have their own facility to lift water from the Chandrabhaga river for supply to Tandi and Sumnam villages for irrigation purpose. The Tribune had highlighted the plight of farmers, who were suffering due to a long dry spell.

On April 19, the farmers of Tandi and Sumnam villages engaged a JCB machine to dig a pit on the banks of the Chandrabhaga. They contributed Rs 1 lakh each to arrange pipes and pumps to lift water from the river.

Virender Kumar, a farmer of Tandi village, says, “Every farmer of the village donated Rs 1 lakh for the construction of the lift-water scheme and Rs 55 lakh was collected”.