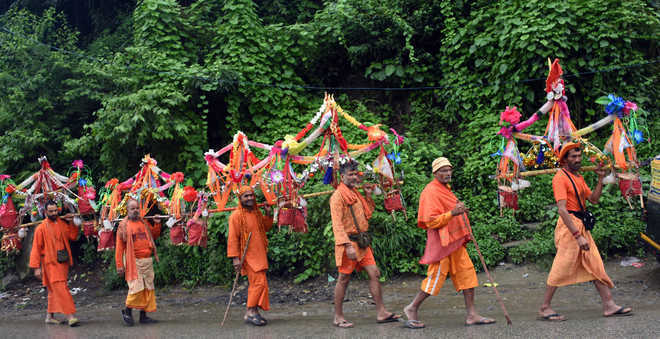 The Paonta Sahib police have decided to block the entry of Kanwariyas at the inter-state barriers to stop them from undertaking the Kanwar yatra to Uttarakhand.

In a coordination meeting at Haridwar today, Paonta Sahib police officials were apprised about the steps taken by the Uttarakhand Police to stop Kanwariyas at the state borders.

“As Kanwariyas from Haryana and Punjab travel to Haridwar from Paonta Sahib, directions have been given to the police deployed at various inter-state barriers to stop them from entering Himachal,” said DSP, Paonta Sahib, Bir Bahadur, who attended the meeting at Haridwar.

“About 31 per cent of the Kanwariyas from Haryana and seven to eight per cent from Punjab use the Paonta Sahib route to enter Uttarakhand. Posters will be pasted and placards will be installed at the barriers to apprise the Kanwariyas about the ban on the yatra imposed by the Uttarakhand Government. If a Kanwariya still manages to enter Utatrakhand, he will be quarantined for 14 days”.

The move is aimed to peacefully convince the Shiv devotees to return in view of the apparent danger of the third wave of Covid.

The DSP said that necessary directions had been issued to the police staff posted at various inter-state barriers such as Behral, Haripur Khol and Kala Amb. — TNS