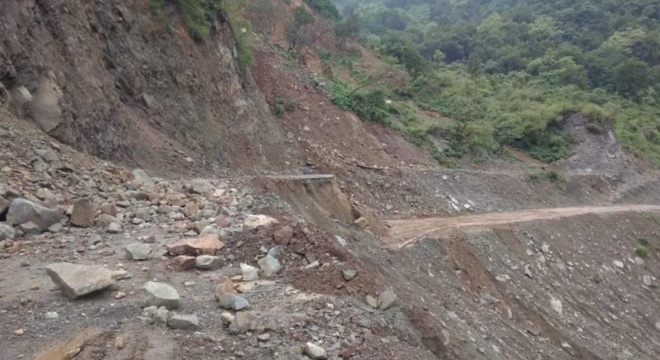 The Paonta Sahib-Shillai National Highway caved in near Sataun on Saturday.

Residents of several panchayats in the trans-Giri area were cut-off from the rest of Sirmaur district after a sizeable portion of the Paonta Sahib-Shillai-Hatkoti National Highway caved in near Sataun this morning.

The road is used by commuters travelling from Kupvi, Nerwa and Chopal from Shimla to Uttar Pradesh and Uttarakhand. The highway had caved in several times in the last few years but the officials concerened were yet to seek clearance under the Forest Conservation Act (FCA) for a new road.

Som Dutt, a local resident, said that a large stretch of the road had been affected due to falling debris and its condition would worsen during the ongoing monsoons. The tardy pace of a new road construction had compounded the hardships of people, who have to take a longer detour now.

The Union Ministry of Climate Change and Environment has accorded an in-principle approval to 28.449 hectares, but made observations on 22.429 hectares that is pending with Paonta Sahib forest officials since July 28.

The total cost of the road work from Paonta to Gumma is Rs 950 crore. The Chief Engineer, North, had opened the tender and the technical bid on June 17 but the work was yet to be awarded. Shillai MLA Harshwardhan Chauhan had also raised the issue in the Vidhan Sabha as well as on several occasions.

Chauhan said that the road is the lifeline of the Shillai constituency and its closure had forced the local residents to take longer detours from Renuka and Paonta Sahib. The option of crossing the Giri river to reach the other side was also not tenable due to the monsoons. He blamed the lack of seriousness on the part of the government in speeding up the road work.