Retaining wall along National Highway-5 near Parwanoo caves in 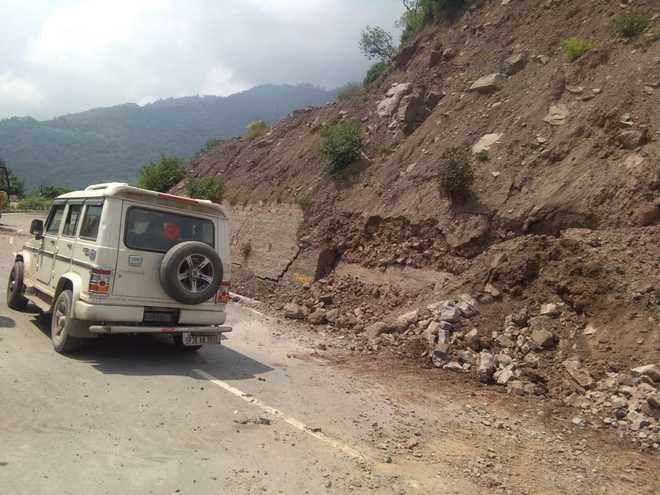 The retaining wall that collapsed at Chakki-ka-Mor, near Parwanoo. Tribune photo

Shoddy work done by a private company on the expansion of the Parwanoo-Solan section of the national highway (NH) No. 5 has led to the collapse of a retaining wall at Chakki-ka-Mor, near Parwanoo, during the ongoing rainy season.

This has led to the erosion of several bighas of arable land in a nearby village. Not only huge cracks are visible on the kutcha road above the highway but also a portion of land is sliding and a house too has developed cracks.

Panchayat pradhan Duni Chand Dhiman says that cracks have appeared in a house and about two or three bighas of arable land, where tomatoes and vegetables are grown, has eroded due to the rain following the collapse of a retaining wall erected below the village by GR Infraprojects that was tasked with the expansion of the highway to four lanes.

He says that a case for seeking due compensation from the National Highways Authority of India (NHAI) has been submitted to the district administration. “Farmers, who use this road to transport their produce to Chakki-ka-Mor, are particularly suffering due to the collapse of the retaining wall. Efforts are being made to restore the link road so that at least small vehicles can pass,” adds Dhiman.

He says that the village road started damaging in 2018 and this year it has worsened during the rains. The latter half of the Kimmughat-Chakki-ka-Mor link road has been rendered unfit for motorists.

Rajesh Kumar, Executive Engineer, PWD, Kasauli division, says that the collapse of the retaining wall raised by GR Infraprojects below Thar village has caused severe damage to the link road above. “It has not only been rendered unfit for plying vehicles but also a lot of money has been spent on the repair of cracks and a portion of the road has also sunk,” adds Rajesh.

GR Infraprojects had earlier blocked the link road to the highway and it was after the villagers protested that it agreed to reopen the road.