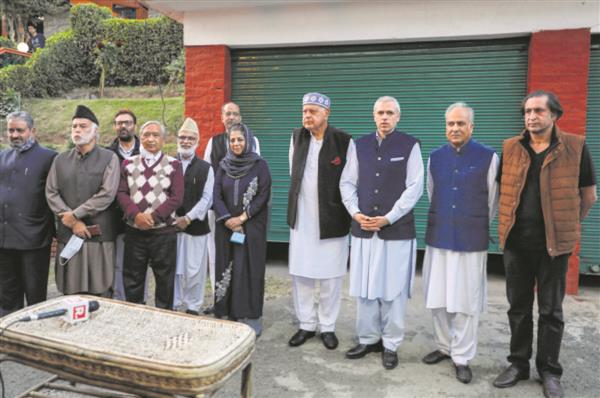 Six political parties of Jammu and Kashmir today formed a formal alliance pledging to work for the restoration of the UT’s pre-August 5, 2019, constitutional status.

The alliance was formalised at a meeting held at Jammu and Kashmir National Conference’s patron and chief Farooq Abdullah’s Gupkar residence in Srinagar today.

After the two-hour meeting, Abdullah said the alliance’s battle was a constitutional one.

“We have named this alliance The People’s Alliance for Gupkar Declaration. Our battle is a constitutional battle. We want the Government of India to return to the people of the state the rights they held before August 5, 2019,” Farooq Aabdullah said.

The JKNC’s vice-president, Omar Abdullah, who attended the meeting, noted that the alliance had been formed by the original signatories to the ‘Gupkar declaration’ and was given a “proper name and structure today”.

The original signatories had congregated at the Abdullah residence on August 4, 2019, and signed the declaration that feared change to J&K’s constitutional status and pledged to work for the autonomy of the region.

The alliance will work against Parliament’s August 5, 2019, moves scrapping Article 370 that guaranteed special constitutional status to J&K and bifurcated the state into UTs of J&K and Ladakh.

The alliance partners also called for a dialogue between all stakeholders to restore J&K to pre-August 5, 2019, status.

Abdullah said the future course of action would soon be planned.

A prominent absentee at today’s meet was Ghulam Ahmed Mir, president of the J&K Congress.

The state Congress said Mir had been advised to get a Covid screening and had informed Abdullah of his absence today.

The meeting also welcomed Mehbooba back from her 14-month detention, which it denounced as “illegal and unjustified”.