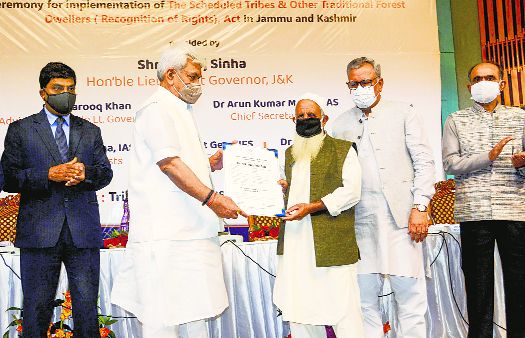 L-G Manoj Sinha hands over forest rights statutory document to a tribal at the SKICC in Srinagar on Monday. PTI

J&K Lieutenant Governor Manoj Sinha on Monday said the administration was working continuously at different levels to safeguard the rights of tribals and would work in a mission mode for their development and betterment.

The L-G was speaking at a ceremony for implementation of the ‘Scheduled Tribes and Other Traditional Forest Dwellers (Recognition of Rights Act)’ in J&K where he handed over individual and community right certificates to the beneficiaries of Gujjar-Bakarwal and Gaddi-Sippi communities.

Describing the occasion as historic, Sinha said, “I thank the PM because of whom on December 1, 2020, we implemented the Forest Rights Act. Before 2019, many central laws were not implemented here. The administration, especially the Forest Department and the Tribal Affairs Department, has started the endeavour to do something for the development of these communities.”

The L-G said about 20,000 applications were received and while several people had been given the certificates, all those eligible would be given the rights. — PTI