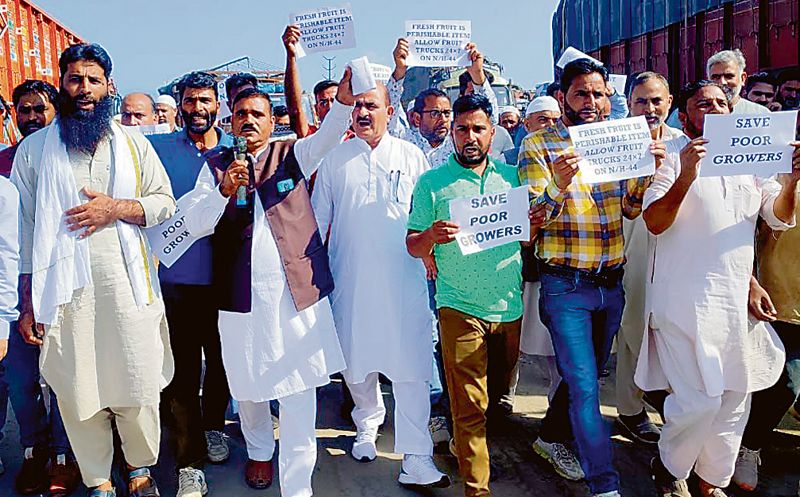 Traders of fruits and vegetables have been protesting for long over the restrictions on the movement of trucks in the Valley. - File photo

The J&K government on Friday directed the concerned officials of the Union Territory to ensure smooth movement of trucks carrying fruit and vegetable to various markets. The directions were issued by Additional Chief Secretary (ACS), Agriculture Production Department (APD), Atal Dulloo who chaired a meeting at civil secretariat here to discuss the issues pertaining to the movement of trucks carrying fruits and vegetables through the National Highway and other roads in the Valley.

“Dulloo directed the concerned authorities to take immediate measures so that fruit-laden trucks are provided a smooth passage,” an official spokesman said. He said the ACS directed police and traffic authorities to provide round-the-clock and hassle-free passage to the fruit-laden trucks on the interior roads and highways on priority basis and avoid their unwarranted stoppages. He also directed them to monitor the fruit transportation on a daily basis, besides holding review meetings with fruit growers and concerned officers.

Dullo said that fruits and vegetables, being perishable commodities, need hassle-free passage and all measures should be taken to ensure prompt and remunerative marketing of such products.

Nearly 1,500 trucks, mostly from Sopore, move towards Qazigund in south Kashmir before crossing the Banihal tunnel everyday. “Only 200 trucks are allowed to cross the tunnel and the remaining are stranded at Qazigund,” Fayaz Ahmad Malik, president of the Fruit Mandi, Sopore, had recently said.