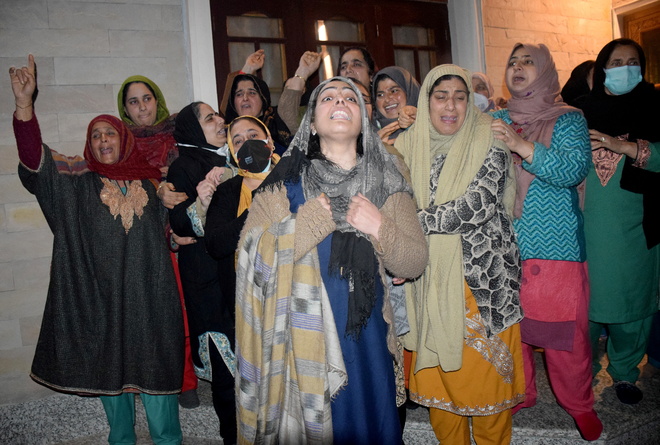 Relatives of Mohammad Altaf Bhat, one of the four killed in Hyderpora encounter recently, mournwhile his body is being taken away for burial at Barzulla in Srinagar on Friday. REUTERS/PTI

Bodies of Mohammad Altaf Bhat and Mudasir Gul, the two civilians killed in the Hyderpora encounter, were laid to rest hours after they were exhumed here, officials said on Friday. With this, the demand for the mortal remains of Amir Magray, the third person killed in the gunfight and whose kin claim he was innocent, has grown louder. 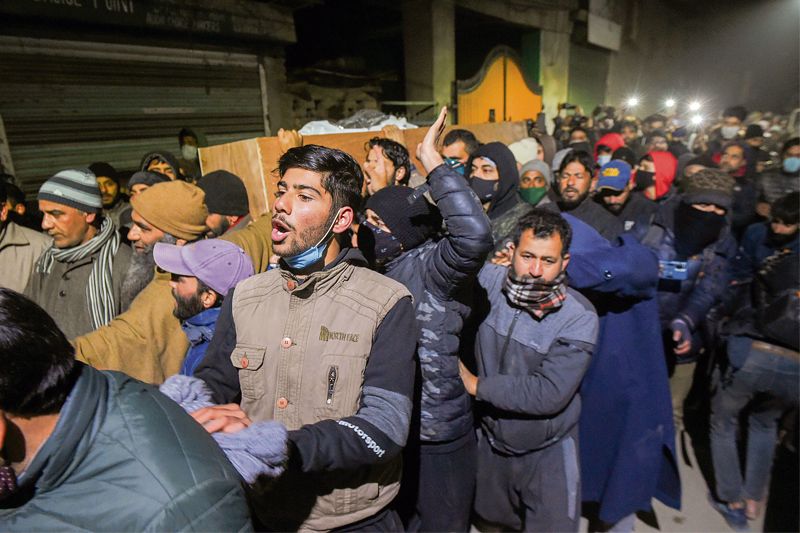 The bodies, which were exhumed at Handwara after sunset on Thursday, reached here around midnight. Men, women and children waiting for the bodies broke down, wailing over the mortal remains as they caught the last glimpse of the slain before they were laid to rest.

The fact that the families are begging for mortal remains instead of asking for justice reflects their lack of faith in the system. Mehbooba Mufti, PDP Chief

Magray’s father is a state bravery award winner. His son has been killed and falsely labelled as a militant which is highly unfortunate. Mohammad Yousuf Tarigami, CPM leader

Amir Magray of Ramban, as a citizen of India, enjoys the same rights (in life and in death) under Article 21 as Altaf Bhat and Mudasir Gul. Junaid Azim Mattu, Srinagar Mayor

What about 4th one?

Does the administration and also we (the society) think he was child (Amir Magray) of a lesser mortal? What about the fourth one? Ruhullah Mehdi, National Conference leader

The bodies were taken out in processions to the local graveyards amidst chanting of religious verses. The authorities had told the families to limit the gathering and bury them quickly, the officials said. They said the bodies were laid to rest at their ancestral graveyards in Barzulla and Pirbagh after funeral prayers were held.

The exhumation came after tremendous pressure from the families as well as mainstream politicians. On Thursday, Lieutenant Governor Manoj Sinha ordered a magisterial inquiry.

Meanwhile, leaders from the mainstream as well as the separatist camp have said the body of Amir Magray should also be returned to his family in the Ramban area of Jammu.

PDP president Mehbooba Mufti wrote on Twitter, “Aamir Magrey is yet to be given a decent burial by his mourning family. The fact that these families are begging for mortal remains instead of asking for justice reflects their lack of faith in the system.”

National Conference leader Ruhullah Mehdi said tweeted, “...Does the administration and also we (the society) think he was child (Magray) of a lesser mortal? And what about the identity and details of the fourth one killed? Or was there a fourth one? Was there even a combatant among them?”

Srinagar Mayor Junaid Azim Mattu tweeted that Amir Magray of Ramban, as a citizen of India, enjoyed the same rights (in life and in death) under Article 21 of the Constitution as Altaf Bhat and Mudasir Gul. He stated that Magray’s remains should be returned.

CPM leader Mohammad Yousuf Tarigami said, “It has been proven beyond any doubt that Magray is a civilian. His father Abdul Latief Magray is a state bravery award winner and now his son has been killed and falsely labelled as a militant which is highly unfortunate. The least the administration can do is to return his body.” — PTI