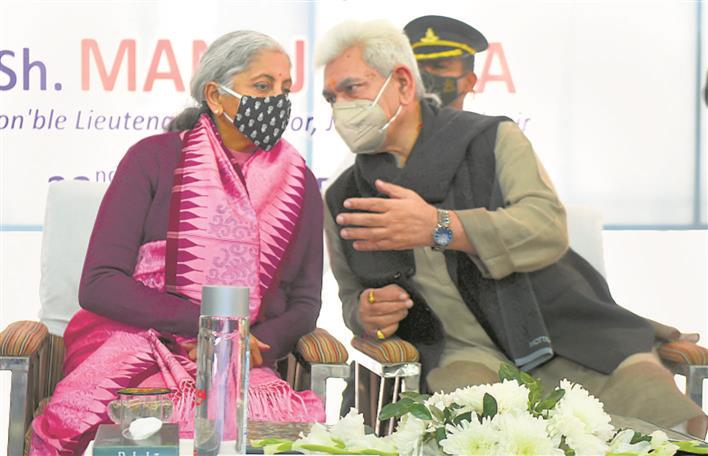 Union Finance Minister Nirmala Sitharaman on Monday inaugurated Rs 130.49 crore worth of works relating to health, education, urban infrastructure and disaster management during her visit to the UT of Jammu and Kashmir. She also laid the foundation stone of an emergency operation centre at Budgam that will cost Rs 35 crore.

Need to reach out to every person

Jammu and Kashmir has spent so many years in a heart-crushing tragic phase… the larger issue is of reaching out to every person in J&K to give them their due. — Nirmala Sitharaman, Union Finance Minister

The minister also inaugurated subprojects of the Jhelum and Tawi Flood Recovery Project (JTFRP) which is assisted by $250 million World Bank loan. The project was started in the aftermath of the September 2014 floods, which severely affected low-lying areas of Anantnag, Srinagar and adjoining districts.

The high social impact of JTFRP was felt in the pandemic when $50 million was allocated and utilised for Covid response. Medical equipment worth Rs 290 crore and 30 oxygen generating plants at a total cost of Rs 75 crore were procured.

She also inaugurated ‘The Chinars’, Aayakar Bhawan-cum-residential complex, the first permanent establishment of the department of income tax in the UT, in the Rajbagh area here in the presence of Lieutenant Governor Manoj Sinha.

“Jammu and Kashmir otherwise a very peaceful and beautiful land has spent so many years in a very heart-crushing and tragic phase… the larger issue is reaching out to every person in J&K, giving them their due which has been denied to them for the past 70 years,” the minister said.

Development for J&K was something that had been in the wings for a long time but “which has never happened”, she added.

“You see some development here and there, but the consistent pace at which the infrastructure was required, basic materials important for living and also for building the economy such as electricity (were not happening),” she said.

The Finance Minister said Jammu and Kashmir had a potential capacity of about 20,000 MW electricity generation, and if it realised its full potential, it could do wonders for its economy and development. The capacity had never been fully exploited, she added.

Referring to the revocation of the special status, she said it was important now for Jammu and Kashmir to get that which had been denied to it in terms of facilities and development. “There is no point if it is kept like a small oligarchy of people holding every resource and denying ordinary citizens,” she said.