Will continue dialogue: MEA on Ladakh border standoff with China 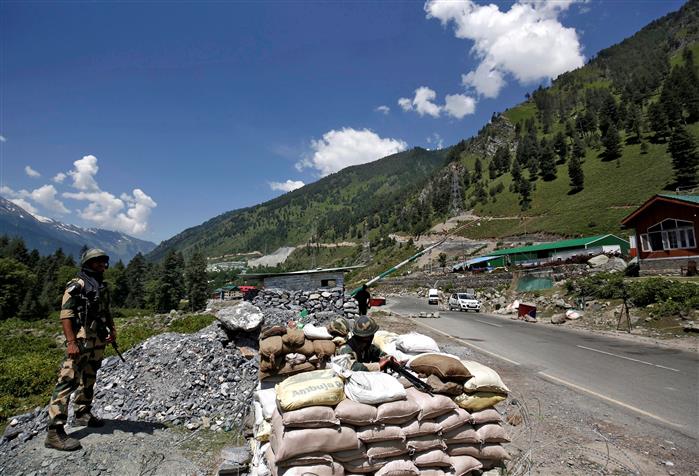 BSF soldiers stand guard at a checkpoint along a highway leading to Ladakh, at Gagangeer in Kashmirs Ganderbal district. Reuters file

India on Thursday said it will continue dialogue and communication through military and diplomatic channels with China on the border standoff in eastern Ladakh and that both sides have agreed to hold another round of talks soon.

External Affairs Ministry Spokesperson Anurag Srivastava while referring to the ongoing military talks between the two countries also rejected as “baseless” a report in a British daily ‘The Times’, which quoted a Chinese professor to claim that the Chinese PLA had used “microwave weapons” to force Indian soldiers to leave positions in eastern Ladakh.

He said the objective of the military talks is to ensure complete disengagement and full restoration of peace and tranquillity along the Line of Actual Control (LAC) in the western sector.

At an online media briefing, he also recalled the eighth round of talks between senior military commanders of India and China in Chushul on November 6. These discussions were candid, in-depth and constructive and both sides exchanged views on disengagement at all friction points along the LAC in the western sector of the India-China border areas, he said “The objective of these discussions is to ensure complete disengagement and full restoration of peace and tranquillity along the LAC in the western sector.

“We will continue our dialogue and communication through military and diplomatic channels and have also agreed to have another round of talks soon with a view to achieve this objective,” the spokesperson said.

Nearly 50,000 Indian Army troops are currently deployed in a high state of combat readiness in various mountainous locations in eastern Ladakh in sub-zero conditions as multiple rounds of talks between the two sides have not yielded any concrete outcome yet to resolve the military standoff that erupted in early May.  China has also deployed an equal number of troops, according to officials.

Asked about the report relating to the People’s Liberation Army (PLA) in the British daily, Srivastava said: “I think you would have seen the response from the Army Spokesperson who has conveyed that these reports are not true and they are completely baseless.” — PTI