60 oxygen cylinders at Jalandhar Civil Hospital, but no fire safety plans in place

Of the oxygen producing units in district, city CH has largest plant 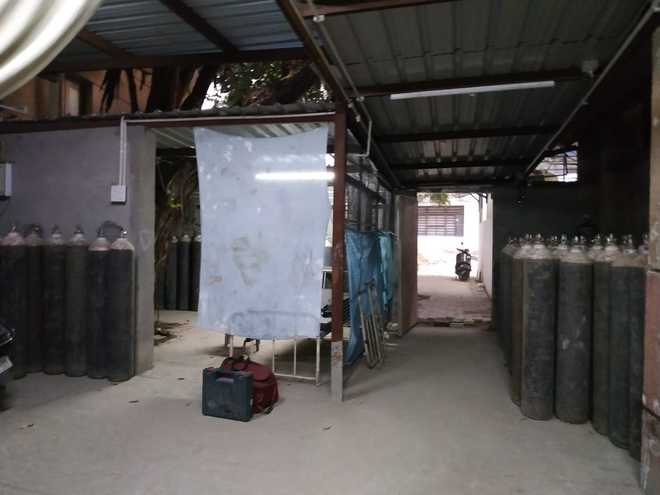 An oxygen storage unit near the gas generating plant at Civil Hospital in Jalandhar. Tribune photo

While the DC’s recent letter calling for fire safety audits, specifically flagged oxygen cylinders and supply pipelines in hospitals as one of the sources for potential fire disasters — the ground reality across medical establishments is pretty sordid.

In his initial letter written on November 9 to the Civil Surgeon, the DC had directed: “It is instructed that a fire safety audit be conducted at all government and private hospitals in Jalandhar to assess safety risks at these facilities and mitigate them at the earliest. Unprotected live electrical points, oxygen cylinders and oxygen supply pipelines among others, are all sources of potential disasters. Given the increase in oxygen shortage and usage in hospitals due to Covid-19 pandemic, the risk associated with fire incidents has increased manifold. As such quick identification of such weak points and remedial actions are of utmost importance.”

A visit to the largest government oxygen plant in the district — Civil Hospital — confirmed the fears of gross negligence with regard to fire safety measures. A survey of the area revealed a gross lack of fire safety arrangements and an invitation to potential disaster around the unit. While the district presently has three government and 10 private hospitals with oxygen plants, sources in the Fire Department said most establishments did not consider oxygen plants, oxygen cylinders or their storage areas as areas particularly vulnerable to fire hazards.

Of the oxygen producing units in district, the Jalandhar Civil Hospital has the largest oxygen plant. Sources in the Fire Department said medical establishments already do just the bare minimum to ensure the fire safety; Oxygen plants are not even on the priority list of areas for top fire safety upgrades.

Barring one big fire extinguishing cylinder, there is nothing in the name of fire safety arrangements outside the PSA oxygen plant of the Civil Hospital, Jalandhar. While the plant generates 130 oxygen cylinders daily, the main plant had one fire extinguisher. However, the entire passage, which was seen housing at least 60 oxygen cylinders right outside the plant did not have a single fire safety hydrant or extinguisher.

A passage right by the stairway near the ground floor OPD of the Civil Hospital leads to a back lane which houses the oxygen plant at the Civil Hospital. The oxygen cylinders are stored in a passage under a shed without fire hydrants, hoses, doors or windows! A curtain serves as the only partition/door/entryway in the area.

A no entry sign to the passage where oxygen cylinders are stored lay fallen when The Tribune visited. A big room houses the compressors and the huge cylinder manufacturing and storing oxygen produced at the Civil Hospital. Right by the unit - smaller concrete compartments store generators, pumps and other equipment. In the passage that connects the plant to the civil hospital building — oxygen cylinders are kept on one side and pipeline circuitry marks the passage on the other. The area also has potentially hazardous network of wires, cylinders, compressors, generators among other equipment. This entire area has only one little oxygen cylinder - the one housed within the main room of the plant.

Assistant Divisional Fire Officer, Jalandhar, Jaswant Singh, said, “In the district-wise audits which are to be conducted onwards, fire safety audits of the oxygen generating units will also be conducted. Oxygen storage and manufacturing areas are on the priority list in terms of fire safety measures.”