Beware of fake mobile apps that claim to check your blood oxygen level : The Tribune India

Such applications are an attack by cybercriminals to gather biometric data, say experts 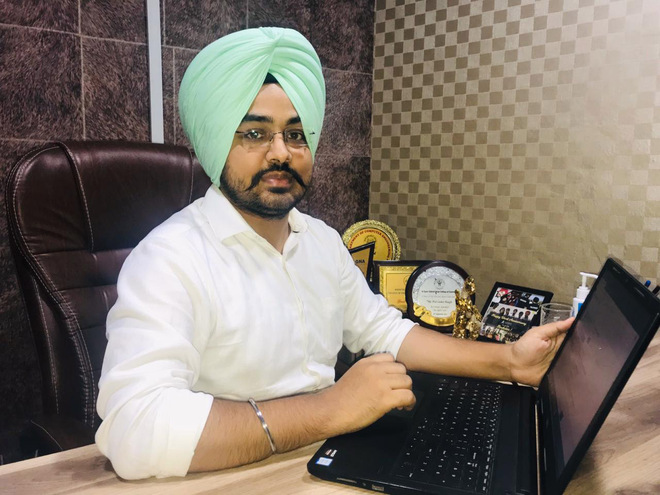 If you happen receive a forwarded WhatsApp message asking you to download an app from the Google Playstore that can check your blood oxygen level using your mobile’s rear camera, then beware!

It’s most likely a phishing attack to hijack your biometric as well other confidential data from your cellphone.

As per information, a viral message, which reads “Every one please install an app and measure oxygen level daily in this corona time and if oxygen level falls below 90 please consult a doctor immediately. App for oximeter, blood pressure and heart rate, give permission of camera to measure on app” has been making rounds on social media and people are falling prey to it, which they unknowingly consider as a cheaper option for the oximeter.

However, the truth is that the claims made by these applications are unrealistic in nature and completely void. Throwing light upon the issue, Cyber Security Researcher, Palvinder Singh, CEO and founder of Secuneus Technologies, here, said fraudsters from announcing unbelievable discounts on online purchases to winning a jackpot worth crores to deferring of EMIs, keep finding new ways as per the trend to dupe people.

“As doctors these days, due to the rise in the number of Covid cases, have been advising people to check their oxygen saturation level on a daily basis to stay safe, therefore, this latest oximeter app thing is nothing but an attempt by cybercriminals to take advantage of innocent people and steal their confidential data,” he said. He said this scam was first reported in Mangaluru in Karnataka and then there were reports that in Kolkata several WhatsApp users ended up compromising with their data security by sharing sensitive biometric data such as fingerprints after installing the app.

“There has been no victim of this cybercrime in Punjab, so far, but yes, some people in the city claimed to have received this forwarded message,” he said. On possible risks it possesses Palvinder said biometric data such as fingerprints that are used for e-wallet transactions and as an alternative to passwords and screen lock could be misused. Besides, there is also a threat of personal photos and data being stolen, as it asks for storage and gallery permissions during installation, he said, adding that such apps can also read the SMS inbox that has the bank account transaction alerts.

In mobile, fingerprint scanners alone can never calculate oxygen level, thus, any such app which claims to measure oxygen level by camera or fingerprint scanner, consider it fake. Always verify and install apps after verifying the developer, ratings, reviews, bugs and total downloads before installing an app. “In case you are not able to recognise if it’s a fake app and you end up installing it, then while you are in the process to check your oxygen level, make sure you do not give permission to share your location, SMS, call log or camera access, as all these permissions are never required for an oxygen measuring app,” said Palvinder Singh.

Last week, the cybersecurity handle of the Ministry of Home Affairs, Government of India, on Twitter had warned users not to install fake oximeter mobile apps from any links they may have received over email, SMS or social media. “... these apps may steal your personal or biometric data from your mobile phone,” it said in the tweet.

Is there an app that checks o2 level?

Palvinder Singh says there are inbuilt health apps in branded cell phones that have a special sensor placed (in picture) next to its rear camera that is capable of measuring oxygen saturation. However, if you ask about those apps that claim to monitor oxygen level using fingerprint or camera, then that’s most likely fake.

Dr Navjot Dahiya, president, Indian Medical Association, Punjab unit, emphasised the fact that oxygen measuring devices such as oximeters have advanced with time. “Also, there are health apps in various smartphones and iphones, which help measure oxygen level. However, verifying the authenticity of such apps is a cumbersome task,” he said, adding that it seems cybercriminals were exploiting the prevailing atmosphere of fear to target online users with malicious links and applications aimed at stealing personal information, thus, people need to be very careful.